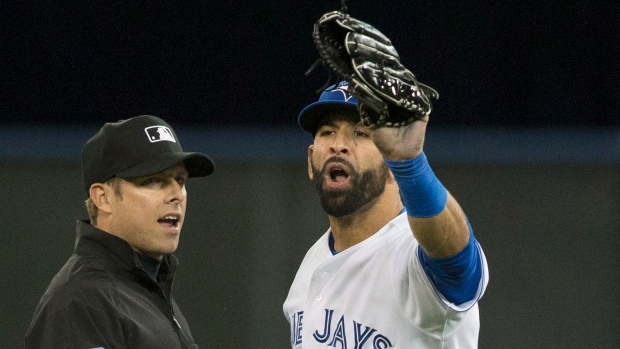 Jose Bautista's Toronto Blue Jays have had a growing feud with their AL East rivals Baltimore Orioles. Here's a timeline of events between the two clubs that like each other less and less every time they play each other.

Baltimore Orioles relief pitcher Darren O’Day strikes out Toronto Blue Jays slugger Jose Bautista to end the inning. As O’Day walked to the dugout, the pitcher started to chirp at Bautista from across the diamond. Bautista responded with a few harsh words of his own.

The following day, Bautista would face O’Day once again, this time in the eighth inning. With a runner on first, Bautista hit a full-count, two-out pitch over the left-field wall to break a 2-2 tie and give the Jays the eventual win. As Bautista rounded third, the pair exchanged more words and Bautista gave the hand motion to O’Day that he talks too much.

Blue Jays rookie starting pitcher Marcus Stroman was suspended six games by the MLB for throwing behind Orioles catcher Caleb Joseph two days prior. The incident happened in the sixth inning when the 23-year-old seemed to intentionally throw a hard fastball behind Joseph. Stroman was seen talking towards Baltimore’s dugout after the inning ended. Just an inning prior, Joseph stepped on Jose Reyes’ hand when performing a head-first slide which could of lead to the Stroman pitch.

Earlier this season, the Jays played a weekend series in Baltimore. Bautista came to the plate in the eighth with two-out and his team up 8-7. O’Day was on the mound and proceeded to throw behind Bautista. During the same at-bat Bautista would get O’Day again and belted a two-run shot over the left-field wall. Bautista proceeded to perform an extended home-run trot and had more to say to the Orioles from the dugout. All O’Day could do this time was smile.

The scene shifted back to Toronto for the next chapter in this growing rivalry.  Bautista was at-bat in the seventh inning with his Jays rolling over the Orioles in the opening game of the series. Right-handed rookie Jason Garcia was pitching and threw behind Bautista much-like the incident with O’Day earlier this season. Warnings were issued to both teams. On the next pitch, Bautista hit another two-run shot and admired this one probably more than any home run he’s hit in his career.

He wasn’t done there. The five-time All-Star had something to say to second baseman Ryan Flaherty during his trot and then went after Adam Jones when he was taking his spot in right field the next inning.

"I'm an emotional player and I play with a lot of passion; you throw at me, I'm not going to forget and if I get you right after I'm going to enjoy it and I did," said Bautista after the game. "I've got no regrets about that."

Jones was upset Bautista showed-up the young Garcia, who the Orioles said lost control of the ball rather than intentionally throwing behind his back.

"I could care less what Adam Jones is saying," said Bautista.

"I think it's all pretty well planned out and premeditated and I think (the Orioles) act and hide behind the way their manager acts and conducts himself on the field," said Bautista. "They're going to continue to keep doing that until something comes down from MLB."