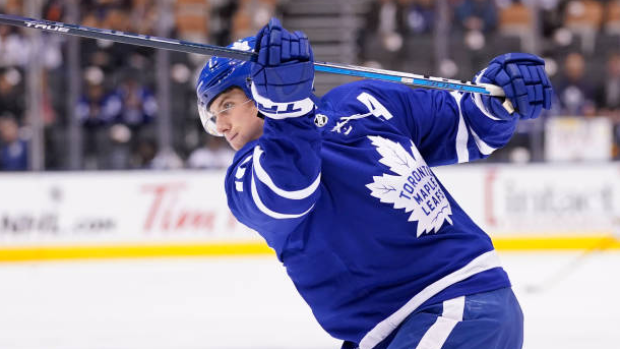 TSN Toronto reporter Mark Masters checks in daily with news and notes on the Maple Leafs, who practised at Ford Performance Centre on Friday ahead of Saturday’s game against the Ottawa Senators at Scotiabank Arena.

Mitch Marner plays on Toronto's top line, top penalty kill unit and top power play unit, which doesn't leave a lot of time to rest during games. Does he ever get tired?

"It's a great question, because it doesn't appear that he does, frankly," said Leafs coach Sheldon Keefe. "He's very, very smart with how he conserves his energy, seems to be in great shape and seems to be able to go forever."

Marner is averaging 22:03 of ice time per game since Keefe took over behind the bench, which is an increase of 1:42 from what he was getting under Mike Babcock. Among forwards, only Connor McDavid (22:10), Leon Draisaitl (22:19) and Jack Eichel (22:44) are seeing the ice more since Marner returned from an ankle injury on Dec. 4.

On the Leafs only Morgan Rielly, a defenceman, has averaged more ice time per game under Keefe. So, we asked the man himself, does Marner ever get tired?

"No," the 22-year-old said with a chuckle. "I mean, I don't know. It doesn't feel like it sometimes, but there's obviously shifts out there where you get trapped in your own zone or something like that and you need to take a little breath and relax so there's definitely times when it happens. I try to just make sure my conditioning throughout the year is at the top level."

And there's no sign of Marner wearing down. In fact, he's always looking for more.

"He gives you the little look over his shoulder wondering if he's next or, if he's not, 'Why aren't I?’ kind of thing," Keefe said with a smile. "But those are the cues you look for from players, especially your best guys, because you're trying to gauge, are they tired? Sometimes if they're tired they don’t want the next shift and they're telling you by not giving you the eye contact or you just see their back moving a little bit because they still haven’t quite caught their breath, those are all the little things you're looking at. So, when a player is giving you the eyes he’s telling you, 'I'm ready so don't slow this down any more, let get me going.'"

"It's more just so he knows he doesn’t have to sit our line or wait for our line," Marner said. "It's just after a PK or something like that or if he thinks I'm still tired from that, I just try and give an eye or talk to (assistant coach Paul McFarland) and let him know, 'I'm good to go.'"

It's not just Marner getting more minutes. John Tavares and Auston Matthews are also taking more shifts under Keefe. And the players say it's a big help in unleashing their offence.

"We're trying to take advantage of that," said Matthews, who's up 55 seconds per game. "We're playing a little bit more throughout the games so, as offensive players, that's everything you want, right. So, it's what you do with that opportunity and we've been trying to make the most of it."

Matthews has 22 goals in 28 games under Keefe, which leads the league in that stretch.

"Being out on the ice more you get more opportunities to score," Marner said. "And I think you get used to playing against certain people and kind of find out their tendencies and I think it helps out a lot."

Keefe notes that his newly installed system works best when the best players are on the ice and in a groove.

"With our style of play and how we're moving the puck around, we try and keep the puck as much as we can," Keefe said, "keep it in the hands of the good players more often."

Tavares has been relatively quiet since returning from the bye week failing to hit the scoresheet in Nashville and Dallas. He was also held pointless in a loss to the Blackhawks before the break.

"Certainly, you know, I'd like to be more productive and continue to raise my game," Tavares said. "I think coming off the break, I haven't maybe been quite as sharp as I'd like to be. I feel like at times I've done a lot of good things in good stretches and just haven't been able to finish plays off and be rewarded."

Marner was asked what he's seen from Tavares of late.

"He keeps us calm and collected through the room, through the bench, so he's done great in that aspect," Marner said, "and he's still creating near a point a game ... He means a lot to this locker room and everyone knows that in this locker room. We stick together in here. We don't really try and read too much of the outside noise and this place can get a little crazy and will turn on people real quick and we know that so we stay close with each other and we don't let anything bother us."

Tavares is averaging 0.93 points per game this season, which is down only slightly from 1.07 last year.

On Saturday night Jason Spezza will get his first taste of the Battle of Ontario since signing with Toronto in the summer. The veteran forward was a scratch on opening night when the Leafs beat the Senators, but since the coaching change the 36-year-old has consistently dressed. Keefe says he appreciates the veteran presence noting that Spezza seems to have a good rapport with many referees.

"It’s just important to treat people as people," Spezza said of his approach. "I think that’s always been something I've been cognizant of. I get into it with refs sometimes, but there's a human element to it too and I understand that. Those guys work extremely hard, they travel, they go through a grind and I respect that and usually those guys love the game, that’s why they're doing it. So, try to have a good relationship. You get to know guys over the years. You see a lot of the same faces. There's been a lot of turnover lately so there’s a lot of guys I don’t know, but the guys that have been around you just form relationships with. We've all been doing the same thing for a long time and you treat them like people, say 'Hi' to them after games and I think it goes a long way."

During Monday's game in Nashville, Spezza was seen sharing a laugh with linesman Scott Driscoll during a break in play.

Spezza chatting it up during a break. #LeafsForever pic.twitter.com/lf08uZ23RE

"Me and Scottie go way back," Spezza said. "He's one of my favourite guys. He's closing in on retirement and we were having a chat and I think he said he's going to have 1,850 (games) by the end of it and that's pretty impressive and he's cramming games in because he's retiring and he’s not taking a break. He's a big boy, but gets around the ice still pretty good. He's a great guy and someone I've enjoyed over the years and gotten into it with him lots at times, but he's a guy who's really old school and you can laugh about it three shifts later so one of my favourite guys, for sure."

"I'm unsure," said Keefe when asked about the defenceman's status for Saturday’s tilt with Ottawa. "We got to see. He was ill and didn't come into the building today."

Martin Marincin will draw in if Dermott is unavailable.

Keefe confirmed that Michael Hutchinson will play against the Senators, his first start since Jan. 4.