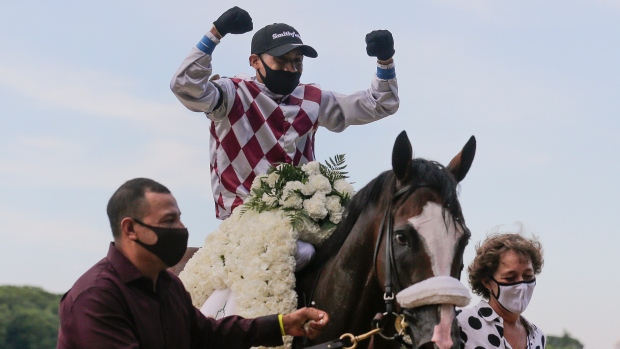 LOUISVILLE, Ky. (AP) — Tiz the Law is the 3-5 morning-line favorite for the 146th Kentucky Derby and will attempt to become the first winner from the No. 17 post position drawn for Saturday’s rescheduled marquee race for 3-year-olds.

All the race favorites will break from the outside. Second choice Honor A. P. — at 5-1 odds — drew the No. 16 post on Tuesday at Churchill Downs. Authentic is the 8-1 third choice from the far No. 18 slot, which last year earned 65-1 long shot Country House the glory when the colt crossed the finish line second before being awarded the victory after Maximum Security was disqualified for interference.

Country House was just the second winner from the No. 18 post in 33 starts (6.1%), with four second-place finishes since the use of a starting gate began in 1930. This year’s Derby will have a new 65-foot, 20-horse starting gate that eliminates the wide gap between the old No. 14 post and No. 15 spot in the auxiliary gate.

Honor A. P.’s odds are slightly better at 8.3%, with four wins, three seconds and three thirds in 48 starts from the No. 16. Animal Kingdom was the last winner there in 2011.

Jockey Manny Franco will try to make history with Tiz the Law, who is unbeaten in four starts this year. That includes the Belmont Stakes in June, which led off this year’s reshuffled Triple Crown. More recently, Tiz the Law won the Grade 1 Travers at Saratoga by 5½ lengths on Aug. 8.

This year’s $3 million Derby was postponed from its traditional first Saturday in May for the first time since 1945 because of the coronavirus pandemic, and no spectators are allowed.

There was one defection Tuesday when Art Collector, who was projected as one of the contenders, dropped out because of a foot issue. He was replaced by South Bend, whose trainer, Bill Mott, guided Country House. South Bend will start from the No. 8 post as one of eight 50-1 long shots.