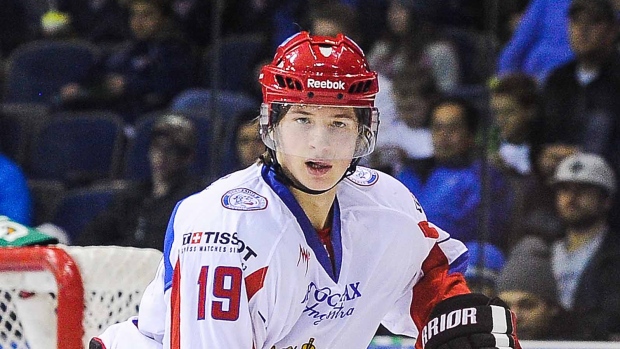 Vladimir Tkachev's entry level contract signed with the Edmonton Oilers on Tuesday has been ruled ineligible by the National Hockey League.

According to NHL deputy commissioner Bill Daly, Tkachev wasn't qualified to sign a contract as he is still eligible for June's NHL Entry Draft.

Players who go undrafted are eligible to sign only if they played a full year in North America. While waiting for his transfer, Tkachev played two games with Omsk of the Kontinental Hockey League and spent the remainder of the season with the Moncton Wildcats of the Quebec Major Junior Hockey League.

Tkachev will go back into the draft after this season.

The 18-year-old appeared in three preseason games with the Oilers, posting three assists and a plus three rating.

The native of Omsk, Russia also played in the 2013 Subway Super Series for Team Russia, marking the second straight year he has represented Russia in the Super Series. Tkachev appeared in six games tallying four points (2G, 2A), a plus one rating and two penalty minutes.