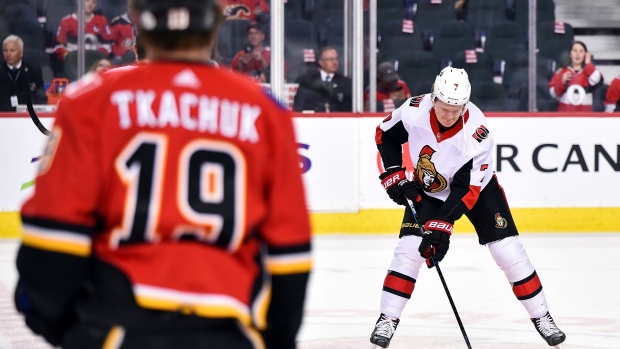 When Matthew and Brady Tkachuk were coming through the developmental ranks, their play drew attention for a multitude of reasons.

There is a tremendous amount of pressure levied on professional athletes when their last name is synonymous with a legend. The vast majority of elite athletes in any sport never get a chance to see their kids compete at a professional level. The few who do know their kids will spend an exhaustive amount of time trying to clear the bar they set for them.

That’s what makes the Tkachuk story so fascinating. Keith’s resume speaks for itself, but Matthew and Brady have seamlessly transitioned into the National Hockey League and have become two of the more dynamic forwards the league has to offer. Differentiating between the two, of course, is difficult – they both love playing between and after the whistles, they both make a living in skirmishes in front of the net, and, most importantly, they both have an unbelievable knack for creating or finishing scoring sequences in those tight areas.

Their professional careers have been extensions of their junior careers. Matthew was taken as the sixth-overall pick in the 2016 NHL Draft after stints with the U.S. National Development Team and the OHL London Knights; Brady went fourth overall two years later, his time spent with the same U.S. National Development Team with one year in the NCAA ranks with Boston University.

Since that time, both forwards have rather instantaneously become top-six fixtures for the Calgary Flames and Ottawa Senators, respectively. This season, Matthew is leading his team in scoring (10 goals, 10 assists) in 22 games, and Brady is fourth amongst Ottawa forwards (six goals and five assists) in 20 games.

But scoring alone doesn’t really encapsulate the impact either forward has on his club. One of the most impressive data points underpinning the play of both is that Matthew and Brady’s teammates alike see their numbers surge when paired with a Tkachuk; when those players are separated from either Matthew or Brady, they tend to see their numbers collapse.

That’s true at both ends of the ice, where both players’ respective team-level impacts have been eerily similar to start their careers: 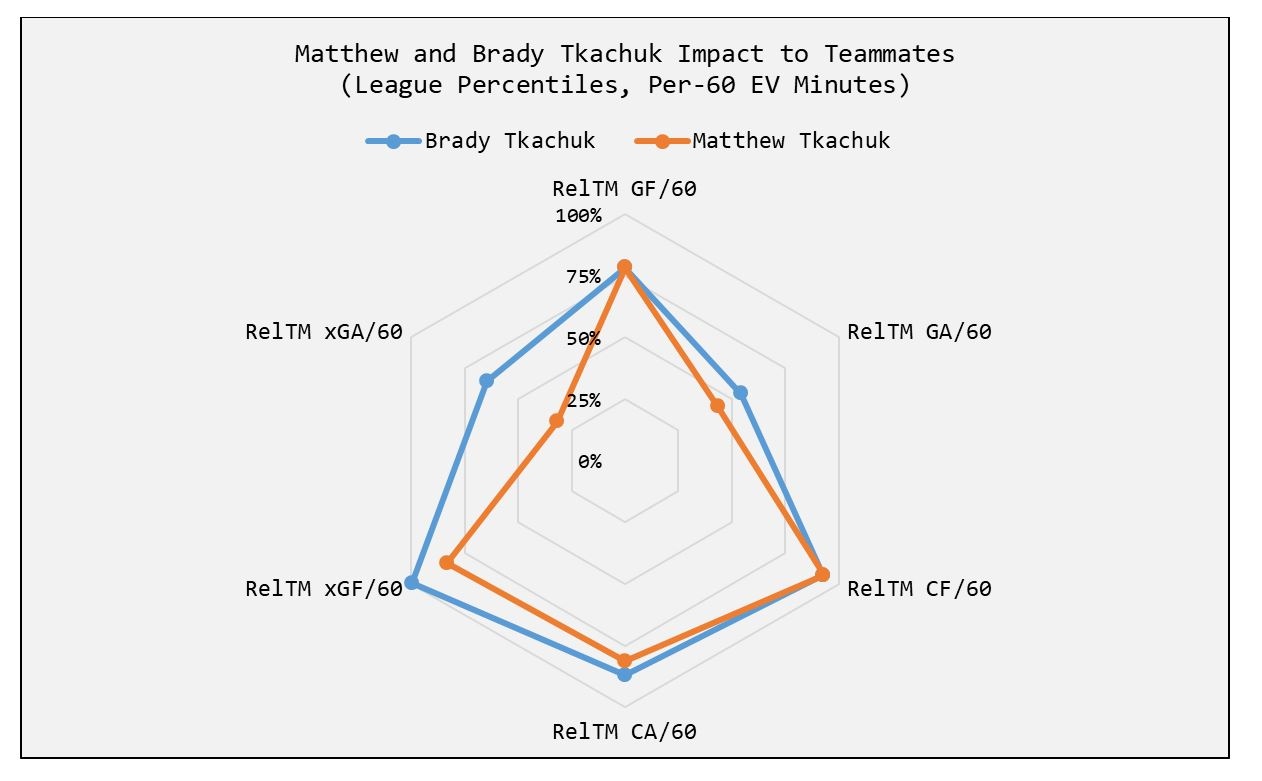 For a quick point of reference, being in the 75th percentile here would indicate that a respective player boosts the performance of his teammates better than 75 per cent of forwards around the league.

To that point: the Tkachuk brothers appear to have an impact everywhere, but it’s most pronounced in the offensive zone. Whether we are looking at goal rates, shot rates, or expected goal rates, both Matthew and Brady have a substantially positive impact on the performance of their linemates on the attack.

Across the board in the three major teammate relative offensive categories, Matthew and Brady have an impact that exceeds more than 75 per cent. (Brady’s impact on teammates expected goal rates is actually in the 99th percentile; his peers here include Andrei Svechnikov, Brad Marchand, Brendan Gallagher, Connor McDavid, Jeff Skinner, Mark Stone, Sidney Crosby and Sean Couturier. I think you get the point.)

If you are an Ottawa fan here, you have to be overwhelmed with excitement. Not only does Brady appear to be a mirror image of his incredibly successful older brother in Calgary, he’s matched (or exceeded) his numbers in basically a rookie season and a fraction of a sophomore year when it comes to teammate impacts.

Granted, there are other areas of the game where Matthew’s numbers are more impressive and may not be obvious in the graph above – those include (but certainly aren’t limited to) Matthew’s exceptional drawn penalty rate, a repeatable skill that creates heaps of incremental power-play opportunities for Calgary and adds goals and wins to the standings over longer periods.

It is true that Matthew and Brady are, in one word, annoying to play against – that’s been a common refrain we have heard from players and teams around the league since both entered the NHL. It’s also true that they are exceptional teammates to have on the ice. Regardless of who they play with, who they play against, or how they are deployed by their head coaches, the Tkachuk brothers drive line performance in considerable fashion.

And to that point, they’re ultimately no different than Keith.