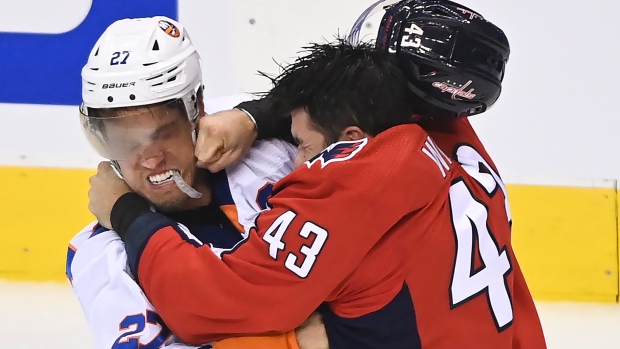 Lee delivered a hard open-ice hit just two and a half minutes in to the game and Backstrom eventually had to leave after seven shifts. Reirden gave no update on the centre after Washington's 4-2 loss, but didn't hold back on the hit, calling it "late" and "predatory."

Caps defenceman John Carlson, who fought Lee seconds after the play, said it was "real dirty to me."

Lee was penalized for interference.

"I tried to throw the brakes on a little bit there, but I caught him," Lee told reporters. "The end result after that was a penalty, a couple of fights. It was settled and then the game continued on."

Lee was involved in a second fight in the first period, this time with Washington's Tom Wilson. Lee also scored a third-period goal that tied the game.

“Playoff hockey should be right up Anders' wheelhouse, if you will,” Islanders head coach and former Capitals bench boss Barry Trotz said. “He's big. He's strong. He scored an important goal. He had a hit. And he responded to (Tom) Wilson's challenge. What more can you ask from a leader.”

Game 2 between the Caps and Isles will go Friday night from Scotiabank Arena.