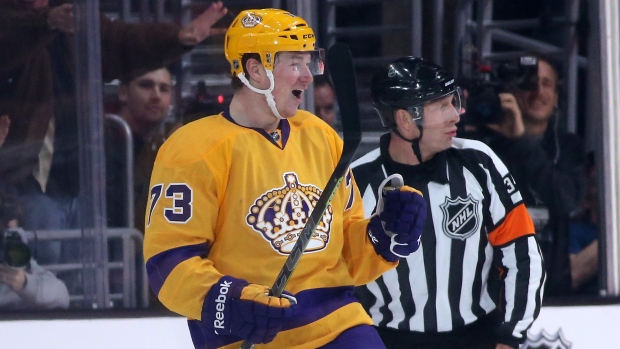 LOS ANGELES, Calif. - The Los Angeles Kings returned to Staples Center following their annual Grammy road trip with the kind of performance they could really hang their hats on.

"We played a really solid game. When we play like that, it's way more fun — especially when we're winning," Toffoli said. "They scored two quick goals, but we didn't let it faze us. We stayed with our game, kept working hard and we scored big goals at the right time."

Mason Raymond had two goals and David Jones also scored for the Flames, who had won their three previous meetings this season — all by one-goal margins and two in overtime at Staples Center. Jonas Hiller gave up five goals on 40 shots on his 33rd birthday before he was replaced by Karri Ramo with 11:42 remaining and Calgary trailing 5-2.

"They brought their A-game and they outplayed us for most of that game," Jones said. "We were close going into the third, then a few mistakes and it was in the back of our net. They have so much talent. And when they turn it up like that, they're tough to play with."

The Kings, returning from a 2-3 road trip that ended with back-to-back wins over Tampa Bay at Columbus, outshot the Flames 19-4 in the second period and tied the score 2-2 on Toffoli's second goal of the game just 15.2 seconds before intermission. Jeff Carter, who had three assists, earned his 500th NHL point on the play.

"I think Tyler's been doing a really good job," Carter said. "Obviously, there's going to be ups and downs, and we've all had streaks where the puck hasn't been going in for us. But Tyler's really strong in his own end and plays the right way. He battles on the walls and makes plays to the centerman, which makes my job a heck of a lot easier. For a young guy, he's pretty impressive."

Toffoli opened the scoring 3:16 in, using Carter as a screen and beating Hiller to the stick side with a 25-foot wrist shot. He completed the Kings' first hat trick of the season on a breakaway with 11:42 remaining.

"It's a personal accomplishment. But we're a pretty tight-knit group here, and individual stats don't really mean a whole lot," Toffoli said. "At this time of the year, it's huge just to get wins. We're just trying to win games and get consistent. It's our third straight, and we've got to keep going."

Toffoli has a team-high 18 goals, and six in seven games after missing the previous six because of mononucleosis.

"It was a big win for us," Carter said. "I felt like we controlled the play a lot. We hung onto the puck in their end and made plays. The difference was that we capitalized on our chances."

Jones and Raymond scored 32 seconds apart early in the second to put the Flames ahead 2-1. Jones redirected a shot by T.J. Brodie past Jonathan Quick just after Hiller stopped Carter on a short-handed breakaway.

"Momentum swings obviously played a part in the game," Raymond said. "They had a lot of shots on us, and Hills kept us in there as long as he could. I don't know what our final shot total was, but I know it was around 15 — and that's not good enough. They outplayed us most of the game and they deserved to win."

Raymond scored into a wide-open net right after teammate Curtis Glencross made contact with Quick at the edge of the crease. Referee Brad Meier ignored what could have been a goalie interference call; the frustrated Quick broke his stick while slamming it against the left post.

Quick then went to the bench for a replacement stick as Meier assessed an unsportsmanlike conduct penalty against him. That increased Quick's penalty-minutes total to 14 — two more than he had in his seven previous NHL seasons combined.

NOTES: Barry Melrose, the first coach to guide the Kings to the Stanley Cup Finals in 1993, was honoured before the game as the club staged the first of three "Legends Night" ceremonies. ... The Kings beat the Flames in his first playoff series with them... Darryl Sutter, who won two Stanley Cups in his first three seasons as Kings head coach, tied Larry Robinson for fourth place on the franchise list with 233rd regular-season wins. ... The only other time Hiller played an NHL game on his birthday was in 2012, when he made 24 saves in Anaheim's 5-3 victory at Columbus. ... The Flames came in with 33 more third-period goals than their opponents, the best differential in the league.