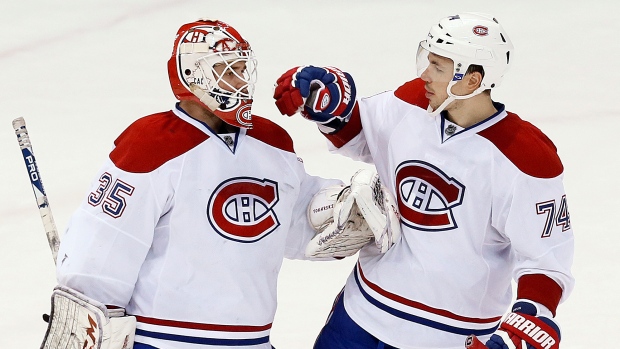 Thanks to some lucky bounces and a lethargic performance by the Red Wings, they were still able to post a sixth-straight win, beating Detroit 4-1.

"We've got a little roll going right now, and we need to keep it going," said Dustin Tokarski, who made 28 saves in his fifth game of the year. "Everyone contributed tonight. We were blocking shots and playing the right way."

Playing for the second time in as many nights, Montreal scored three times off odd deflections and limited Detroit to 10 shots in the first two periods despite four power-play chances.

"I think we were always trying to find one more pass, and it didn't work," said Red Wings captain Henrik Zetterberg. "Some of the time, you just have to throw the puck at the net. They did that, and look at what happened for them."

Two nights after dominating the Blackhawks in a 4-1 win, the Red Wings took too long to get untracked against another Original Six rival.

"You've got to come out with more jump and more energy than we had tonight," said Red Wings coach Mike Babcock. "I thought we did a great job of starting the game the other night against Chicago, but we didn't do that at all tonight."

Montreal took a 1-0 lead at 3:20 of the second, moments after killing a Red Wings penalty. Detroit botched a line change, allowing Brandon Prust to pick up a loose puck and beat Jimmy Howard with a wrist shot from the top of the faceoff circle.

The Canadiens doubled their lead with a fluke goal at 8:36, as P.K. Subban's slap shot from the blue line hit the inside of Kyle Quincy's left thigh and deflected over Howard's shoulder.

"The bounces we're getting are the result of all our hard work," Subban said. "Before the game, we talked about all the excuses we could make to not come out strong, but we wanted to put forth our best effort, and that started with Mr. Tokarski."

Montreal got another fortunate deflection to make it 3-0 at 1:37 of the third. Howard stopped Brendan Gallagher's shot, but the rebound banked off Nicklas Kronwall's skate directly to Tomas Plekanec, who was left with a simple tap in.

Detroit finally beat Tokarski at 4:06 when Riley Sheahan knocked in a loose puck for a power-play goal. Tokarski, who had been knocked down earlier in the scramble, repeatedly signalled to the officials that his mask was out of position, but play was allowed to continue.

Gallagher put the game away with another odd goal. His shot from behind the line ricocheted off Howard's catching glove.

"There were a lot of things I liked tonight," Montreal coach Michel Therrien said. "The penalty kill was big and Dustin made some key saves. We were playing our fourth game in six nights, back-to-back and against a good Red Wings team, but the guys didn't take any excuses."

NOTES: Defenceman Jakub Kindl was a healthy scratch for Detroit. He was replaced in the lineup by D Brian Lashoff. ... Montreal was without LW Michael Bournival because of a shoulder injury. ... Former Red Wings Dominik Hasek and Mike Modano, who is from suburban Detroit, and former Canadiens coach the late Pat Burns are scheduled to be inducted into the Hockey Hall of Fame on Monday.