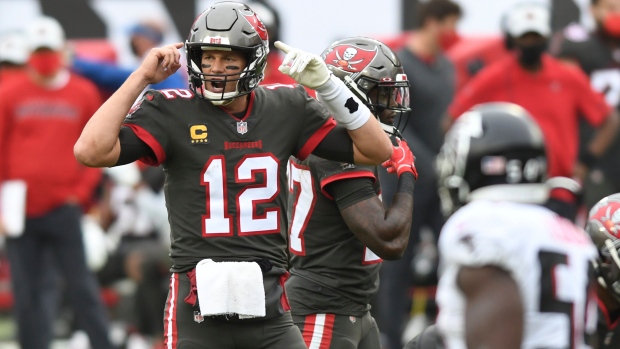 TAMPA, Fla. — Tom Brady and the Tampa Bay Buccaneers are heating up at the right time. Hardly surprising where Brady is concerned.

The six-time Super Bowl champion threw for 399 yards and four touchdowns Sunday, helping the playoff-bound Bucs clinch the fifth seed in the NFC with a 44-27 regular season-ending win over the Atlanta Falcons.

But the team's fourth straight victory, which means the Bucs (11-5) will face the NFC East champion, Washington or the New York Giants, on the road in the club’s first post-season game in 13 years, may have come with a steep cost.

Star receiver Mike Evans was carted to the locker room with a left knee injury late in the first quarter and did not return.

Evans was hurt one play after a 20-yard reception made him the first player in NFL history to begin a career with seven consecutive 1,000-yard seasons. He went down trying to make a catch in the end zone and was carted to the locker room after first trying to walk off with assistance from a trainer.

“It meant the world for him to get that record and, then, to have an easy touchdown," Bucs coach Bruce Arians said. “The turf was really slick in the end zone. It was just a freaky thing. Knock on wood, we don’t think there is any serious damage, but we will know more in the next 24 hours.”

Brady threw touchdown passes of 29 and 4 yards to Chris Godwin. The 43-year-old quarterback also teamed with Antonio Brown on scoring plays of 25 and 30 yards to finish with a franchise-record 40 in his first season with the Bucs.

Brady joined Aaron Rodgers, Drew Brees, Peyton Manning and Dan Marino as the only players with multiple seasons of at least 40 TD passes. Rodgers has done it three times, the others twice.

Now it's on to the playoffs, where Tampa Bay hasn't appeared since 2007.

“It's about one football game, who plays well, who executes when the pressure is on,” said Brady, who's thrown for at least two touchdowns in seven consecutive games.

He shrugged off a question about whether he imagined he might be able to throw for 40 touchdowns in his first season with a new team, especially considering the absence of a normal off-season due to the coronavirus pandemic.

“Whatever happens for me as a quarterback is reflective of what we do as an offence,” Brady said. " I love playing with the guys I play with. We’ve got a great group of receivers, a great group of tight ends, very selfless. The backs have done an incredible job, and the offensive line has been playing great.”

Matt Ryan completed 29 of 44 passes for 265 yards and two touchdowns for the Falcons (4-12), who finished a distressing season that claimed the jobs of former coach Dan Quinn and general manager Thomas Dimitroff after an 0-5 start.

Ryan scored on a 1-yard sneak and also threw scoring passes of 19 yards to Russell Gage and 1 yard to Hayden Hurst. The latter trimmed Atlanta’s deficit to 30-27 before Brady put the game away with two late drives.

Interim coach Raheem Morris took over Oct. 12 and went 4-7. He interviewed for the full-time position last Friday and would like to return.

Some players are pulling for him to return.

“He’s a great coach,” running back Brian Hill said. "Obviously he had nothing to do with personnel this year. He just worked with what we had and he did a great job.”

With Evans out, Brady still had plenty of playmakers to work with.

Brown had his most productive day since joining the Bucs midway through the season with 11 catches for 138 yards. Godwin had five receptions for 133 yards, while Evans had three catches for 46 yards before exiting.

Falcons: Wide receiver Julio Jones (hamstring) missed his fourth consecutive game, finishing the season with 51 receptions for 771 yards and three touchdowns in nine games. ... Defensive tackle Grady Jarrett (groin) left in the first half and did not return.

Buccaneers: Cornerback Carlton Davis sat out for the second straight week with a groin injury. ... RB LeSean McCoy was inactive. He didn’t practice late in the week, however, the team said it was not injury related.

Falcons: will have a busy off-season, beginning by hiring a general manager and coach. Morris thought his interview with owner Arthur Blank went well, adding: “Now we’ll play the waiting game and see how it goes.”

Buccaneers: make their first playoff appearance in 13 years. They haven’t won a post-season game since their Super Bowl championship run to end the 2002 season.