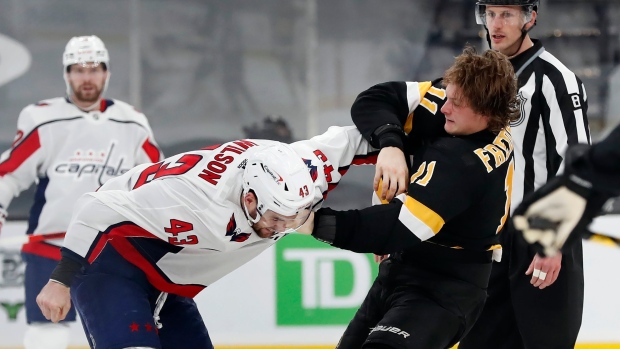 Washington’s Tom Wilson has been offered an in-person hearing via Zoom for Boarding Boston’s Brandon Carlo. Date and time TBD.

Player Safety announced later in the day that the hearing will take place Saturday night.

An in-person hearing permits the league to suspend Wilson for five or more games. His last suspension was originally a 20-game ban that was reduced to 14 for a pre-season 2018 hit on Oskar Sundqvist of the St. Louis Blues.

The incident occurred when Carlo went to play the puck in the corner facing the boards. As he turned toward centre ice, Wilson came in and drove Carlo's head into the boards. Carlo collapsed to the ice and needed help getting to the bench.

Going to be fascinating @NHLPlayerSafety process w Tom Wilson. This is not a hearing for Rule 48 (illegal check to head) because it does not meet the criteria.

Precedent is being broken. Wilson could become 1st in NHL history suspended for boarding on hit that wasn't from behind

"This is not a hearing for Rule 48 (illegal check to head) because it does not meet the criteria. Precedent is being broken. Wilson could become 1st in NHL history suspended for boarding on his that wasn't from behind," tweeted TSN Senior Hockey Reporter Frank Seravalli.