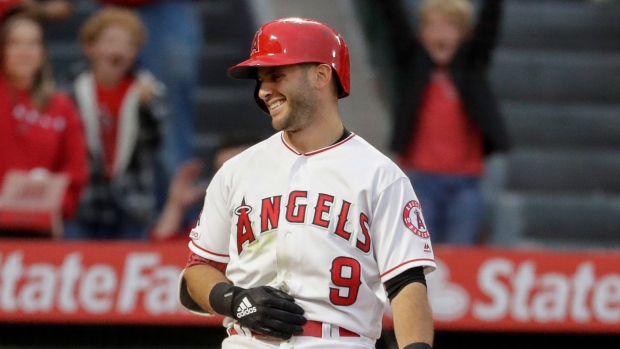 Pinch-runner Wilfredo Tovar tagged up and scored from second on Shohei Ohtani's long fly to left in the seventh inning for the Angels (40-40), who opened their homestand by getting back to .500 with their fifth win in eight games.

Joey Votto homered for the Reds, who have lost three straight for only the second time since mid-April. Yasiel Puig and manager David Bell were ejected for arguing in the sixth.

La Stella led off the first with a long drive to centre, and Nick Senzel couldn't make a tough catch. The ball rolled along the warning track toward right, and La Stella motored home for the 16th homer of his breakthrough season.

La Stella singled leading off the seventh, and Tovar advanced three bases on two long flyouts after replacing him.

After Tovar tagged up and went to second on Mike Trout's fly to deepest centre, he went from second to home when Jose Peraza caught Ohtani's fly to the left-field wall, but apparently lost track of the outs and didn't hustle his throw back to the infield.

Votto drove a solo shot off Heaney in the first, homering in his second straight game after hitting just two homers in his previous 30 games.

Tyler Mahle (2-8) yielded six hits and four runs over five innings in the Orange County native's first career start at Angel Stadium. Mahle, who graduated from nearby Westminster High School, is 0-3 in four starts in June despite giving up just 11 earned runs.

Rengifo homered off Mahle in the second.

Albert Pujols went 1 for 4 while batting sixth for the first time since his rookie big-league season in 2001. Pujols hadn't batted lower than fifth in 2,608 consecutive games. Since 1920, only Pete Rose (2,994) and Hank Aaron (2,971) had longer streaks of batting in the top five of his team's order, according to Stats LLC.

PUIG NOT YOUR FRIEND

Puig argued strenuously following a called third strike by umpire Kerwin Danley. The longtime Dodgers outfielder eventually dumped his helmet and bat at the plate, and Bell had to restrain Puig from a more vociferous argument at one point.

Reds: LHP Alex Wood has a sore back after throwing batting practice last Saturday. Cincinnati isn't sure when he will resume throwing. The former Dodgers starter hasn't pitched for the Reds since the off-season trade.

Angels: Ohtani will throw off a mound Wednesday for the first time since undergoing Tommy John surgery Oct. 1. ... Andrelton Simmons is close to a return from a sprained ankle. He played seven innings in a rehab game with Single-A Inland Empire on Tuesday. ... 3B Zack Cozart's left shoulder inflammation hasn't improved, he said. The former Reds regular has been out since May 27, and he is uncertain whether he'll play again this year.