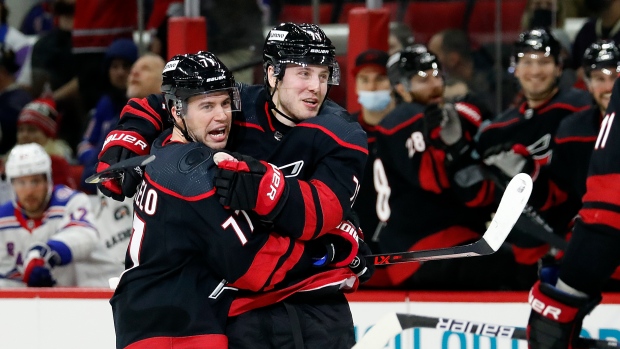 RALEIGH, N.C. (AP) — Tony DeAngelo had a goal and two assists against his former team as the Carolina Hurricanes beat the New York Rangers 6-3 on Friday night.

Sebastian Aho also had a goal and two assists, while Vincent Trocheck, Seth Jarvis, Jesper Fast — another former Ranger — and Nino Niederreiter also scored in the first meeting of the season between the top two teams in the Metropolitan Division. Teuvo Teravainen and Andrei Svechnikov had two assists apiece, and Frederik Andersen stopped 20 shots in Carolina’s third straight win.

Mika Zibanejad and Chris Kreider each had a power-play goal and an assist for the Rangers. Greg McKegg, an ex-Hurricanes player, got his first goal of the season. Alexander Georgiev, playing for the first time in more than a week, made 29 saves.

Since they were shut out for the first time this season Jan. 13 by Columbus, the Hurricanes have totaled 17 goals in three games. That matches the team’s best goal production in a three-game span this season.

Trocheck redirected DeAngelo’s delivery from inside the blue line off the post on the game’s first power play on the way to a 3-0 lead by early in the second period.

But Kreider and McKegg drew New York to 5-3 with goals just 74 seconds apart in the first 6 1/2 minutes of the third period.

The Hurricanes had gone 11 consecutive games without giving up a power-play goal until Tuesday night at Boston. Now they’ve given up three across two games. New York became just the second team with more than one power-play tally in a game against Carolina this season.

Hurricanes left wing Jordan Martinook is on the COVID-19 protocol list. He missed more than a month with an injury before returning for two games prior to this latest development.

The Rangers’ scratches included right wing Julien Gauthier, a former first-round draft pick of the Hurricanes. He’s without a point in his last nine games.