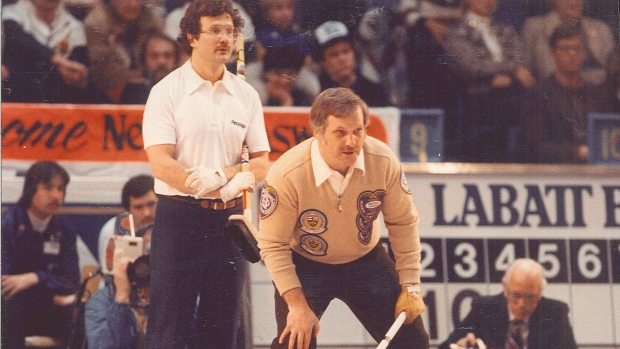 Some of the most popular and famous curlers in Canada have also had the biggest personalities. Let’s take a look at the top 10 colourful curlers from the Brier. 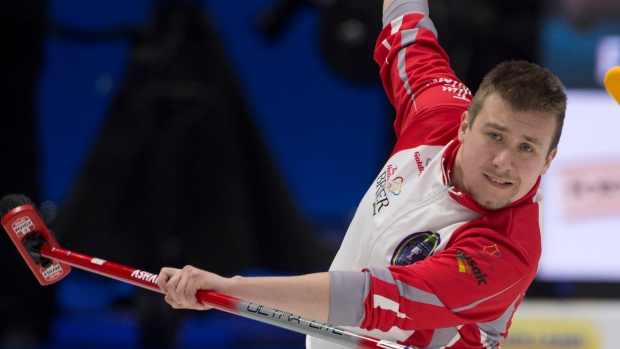 Greg Smith has just one Brier appearance in his career, but he sure made his presence known.

The Newfoundland skip played in the 2018 Brier in Regina as Brad Gushue wore Team Canada colours as the defending champion. At just 21, Smith was the youngest skip in the field and quickly endeared himself to the Saskatchewan crowd with his flamboyant personality, intense shot calling and animated celebrations. He even gave a shout out to his cats after a victory.

Newfoundland won just one game that week, but Smith became a star and won the Ross Hartstone Sportsmanship Award. 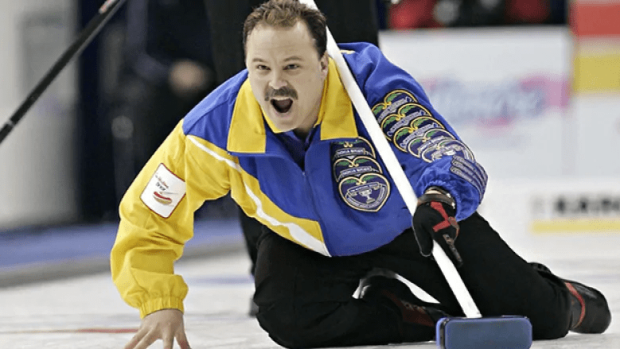 Randy Ferbey skipped one of the most famous rinks in curling. The Ferbey Four worked hard on the ice to capture four Brier titles in five years in the early 2000s, but that didn’t stop them from having a good time off of it. Ferbey insisted that his team spend time at the Brier Patch to mingle with fans and enjoy themselves almost every night.

The Edmonton native was always good for a spicy quote, too.

"I think that's a major flaw. I think there's a few teams here that I don't want to say don't deserve to be here but they haven't proven themselves," said Ferbey in 2005 regarding the qualification process for the Olympic trials. "Winning one event or coming second or third in some other event shouldn't get you here."

Ferbey retired in 2012, but still keeps in regular touch with the game.

Matt Baldwin might be the sport’s first colourful curler.

Baldwin broke out onto the scene as a young and charismatic skip at the 1954 Brier in his hometown of Edmonton, playing against curlers double his age. Baldwin went 9-1 that week and became the youngest skip to capture the Canadian championship at age 27. With his final shot of the tournament, Baldwin delighted the crowd when he slid halfway down the sheet before releasing the rock, a move that was allowed at the time but never attempted.

The rock stopped right on the button, cementing Baldwin’s status as a rock star. Shortly after a rule was implemented, making it illegal to slide past the hog line with the rock.

Baldwin displayed his fun nature again at the Quebec City Brier in 1971 after a storm turned out the lights in the middle of a game. When they came back on, all eight Alberta rocks were in the four-foot, thanks to prank specialist Baldwin. 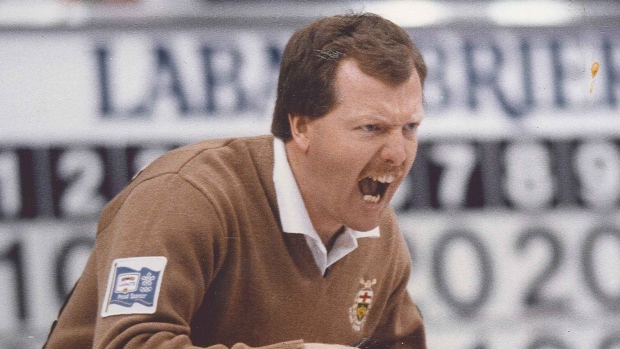 It’s safe to say you know when this next curling legend is on the ice. Two-time Brier champ Russ Howard is the loudest shot caller in curling history. However, Quebec’s Martin Crete would probably have something to say about that.

Howard’s patented “Hurry Hard!” screams coined the nickname “Wounded Moose.” In fact, Howard yelled so loud he once lost his voice during the 1989 Brier in Saskatoon, forcing the skip to use a walkie-talkie system to communicate with his teammates. The Canadian Curling Association told Howard to stop since it was interfering with the official’s walkie-talkie communication.  After the Ontario skip refused to put away the devices, the CCA were forced to make a rule banning walkie-talkies from competition, the first time a new rule was implemented during Brier week.

Howard was a staple at numerous TSN Skins Games as well, winning the event in three straight years from 1991 to 1993. 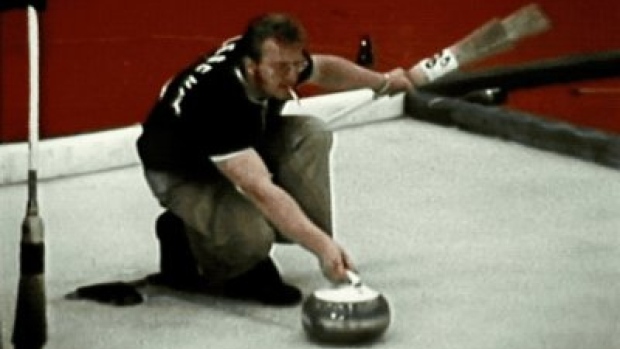 Manitoba curling great Orest Meleschuk played in an era when drinking and smoking on the ice was allowed and the man known as “The Big O” wasn’t shy of doing just that.

Meleschuk won the 1972 Brier in St. John’s, Nfld., and then went on to win the world championship in Germany after one of the most infamous moments in curling. Meleschuk and the Canadians were trailing Robert LaBonte of the United States by two points in the 10th end of the final. With a chance to send the contest to an extra end with his final toss, Meleschuk took out the American shot stone on the button before the shooter rolled far enough to question whether it had stopped in time to score two or just a single, and therefore the loss. LaBonte thought otherwise and jumped in celebration before falling and knocking the rock in question. Since nothing had been agreed upon, USA were forced to give Canada the two points and would later lose the world championship after Canada stole in the extra end. It was dubbed the “Curse of LaBonte.”

The Winnipeg native also played in the first ever “Battle of Sexes,” losing to Saskatchewan’s Vera Pezer. 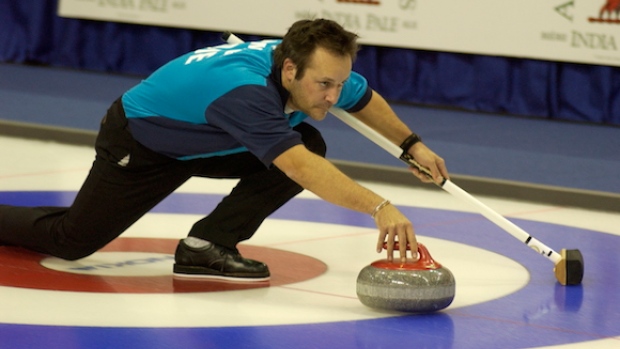 Easily the most popular curler to come out of Quebec, Guy Hemmings was a favourite throughout his career because of his affectionate interactions with fans, his classic bed-head hair and charisma on the ice.

Fans fell in love with Hemmings during the 1998 Brier final against Wayne Middaugh when he changed the score to his favour during a power outage at Winnipeg Arena. Hemmings may have lost the game, but won the appreciation of those in attendance.

Hemmings was so popular that Curling Canada named him ambassador of the Guy Hemmings’ Rockin’ the House Tour in 2001 to help promote the game. 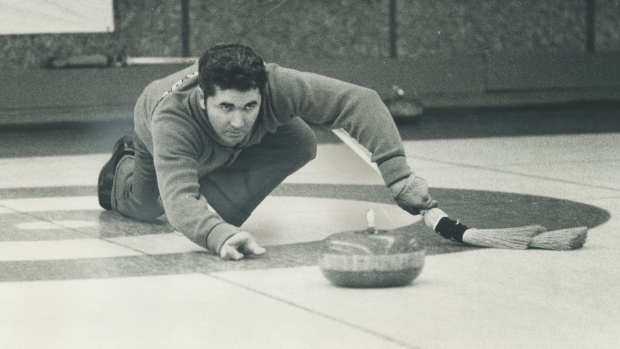 Sam Richardson won four Brier and world titles playing second for his brother Ernie Richardson in the late ‘50s and early 60s and then coached Jack MacDuff’s Newfoundland rink to the province’s first Canadian championship in 1976.

“He was probably the greatest character in the history of the Brier — and there were some characters,’’ MacDuff told the Regina Leader-Post after Richardson’s passing. “He was a wonderful inspiration for every team that came out of Saskatchewan. Everyone loved him because he was very sincere. He wouldn’t give you a token hello. He would give you his time.’’

Richardson’s popularity skyrocketed after his playing career when he became a guest speaker, captivating audiences for years with his engaging and entertaining curling tales. One of his first notable guest speaker appearances came at the 1976 Brier in Regina when then-prime minister John Diefenbaker was forced to pull out because of an illness.

“I remember the joke about Ernie that he had a free draw for three and he ended up blanking the end,’’ long-time friend Terry Sproat told the Leader-Post. “It was that kind of stuff. I could say that and no one would laugh. When he said it, everyone would be rolling. It was just the way he said everything. I went to a lot of places with the guy and I had a lot of fun.’’ 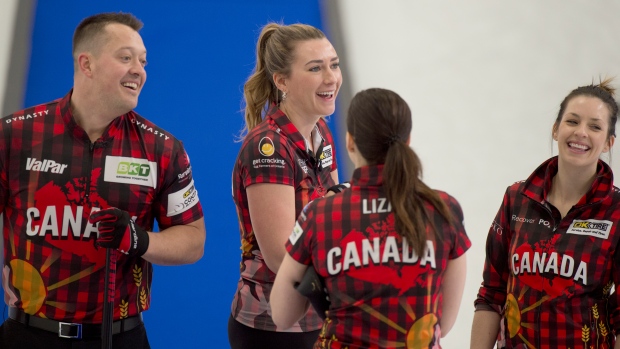 It’s safe to say there isn’t a lead in curling history that has gotten more interview requests than Ben Hebert.

The two-time Olympian has never been afraid to say what he’s feeling, whether it be to the media or on the ice with some colourful language.

Hebert, a four-time Brier champ, is one of the most intense curlers on any rink, but also loves to have a good time as well, regularly cracking jokes with teammates and players on other sheets. 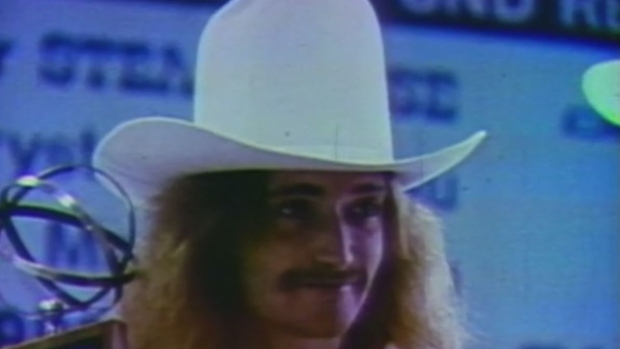 In an era when most curlers were clean cut and shaven, Calgary’s Paul Gowsell was the complete opposite.

Gowsell regularly wore plaid pants with messy hair and a full beard. Combined with a bigger than life personality, the skip was known as the “rebel of curling” during his playing days in the 1970s and 1980s.

Two-time Brier champ Hec Gervais once said that "with a shave and two haircuts, he'd be all right."

Gowsell used to drive from bonspiel to bonspiel in an old, beat up Chrysler van and had no problem with staying up late after games to have a good time. Gowsell famously earned the nickname “Pizza Paul” when he ordered a pizza during a live game while playing in a bonspiel in Regina. As the legend goes, Gowsell’s team won the game when his opponent’s last rock picked on a black olive from the pizza.

Gowsell was the first skip to win two world junior championships (1976 and 1978) and made one career Brier appearance in 1980, losing to Northern Ontario’s Al Hackner in the semi-final. His team were one of the first to use pushbrooms, completely altering the sweeping methods of the roaring game. 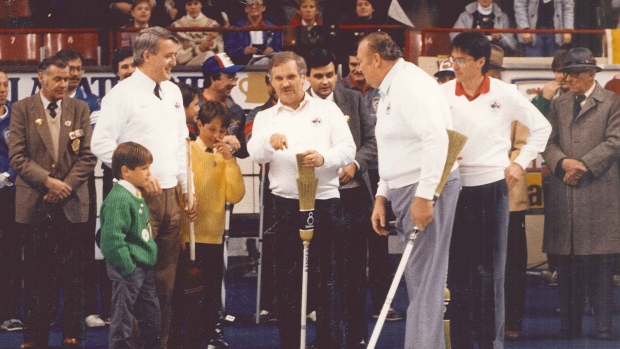 Coming in at the No.1 spot, Ed Werenich is the most colourful curler of all-time.

The Wrench won two Briers and two world championships, making headlines along the way with his aggressive personality on the ice and his colossal clashes with the Canadian Curling Association off of it. It all came to head in 1987 when the CAA said they would disqualify Werenich if he didn’t “shed some pounds” ahead of the Canadian Olympic Trials. This, of course, did not sit well with the combative Werenich.

Curling News editor in chief George Karrys, who captured silver for Canada at the 1998 Olympic in Japan, told Macleans magazine in 2004 that Werenich was the ultimate “blue-collar curler.”

"Eddie was always very aggressive, on and off the ice," he said. "He's the hero of the common man -- the ultimate blue-collar curler."

Werenich is known for epic rivalry with curler Russ Howard as the two Hall of Famers battled each other to get to Brier out of Ontario for years. From 1980 to 1997, Howard won the Ontario Tankard eight times while Werenich claimed the title seven times (once as vice for Paul Savage).

Werenich also went head-to-head with the colourful Marilyn Bodogh in the “Battle of the Sexes” competitions. Werenich was inducted into the Canadian Curling Hall of Fame in 1988 and worked as a firefighter for his day job.