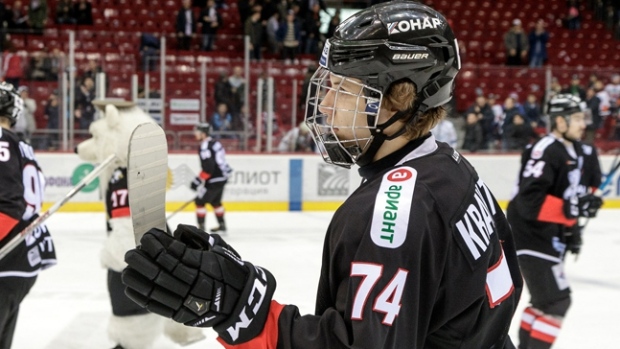 Only players considered to have not achieved full-time NHL status are included in the rankings.

Kravtsov, 19, is a highly skilled winger who is an offensive threat with his combination of speed, power, shot and finish. He’s expanding his game by playing centre this season for Traktor Chelyabinsk in the KHL. Kravtsov’s skill set, along with this adaptability, allows him to impact the game in multiple ways. His style of play is similar to that of the recently retired Rick Nash.

Denisenko, 18, is a dynamic offensive player who has a tremendous level of confidence in his play. Skating for Lokomotiv Yaroslavl in the KHL this season, Denisenko can shoot as well as make a play and has qualities that are reminiscent of Tampa Bay Lightning star Nikita Kucherov.

Cale Makar, 20, (No. 3) of the Colorado Avalanche is the top defenceman on this year’s list. Currently playing NCAA hockey for the University of Massachusetts–Amherst, the 20-year-old has the ability to control the game when he’s on the ice. Dynamic with a flair for the spectacular, Makar will be a welcome addition to the Avalanche blueline.

Portland Winterhawks centre Cody Glass, 19, is at No. 4 for a second consecutive year. The first-ever draft pick of the Vegas Golden Knights looks every bit the number-one centre teams covet. He's more of a playmaker, but his ability to skate, attack and open up ice to create offensive opportunities allows him to be a consistent threat.

Our top five is rounded out by Anaheim Ducks property Troy Terry, 21, who is excelling in the American Hockey League this season with the San Diego Gulls (37 points in 32 games). The American right winger is a great skater who creates plays at a high pace to make life uncomfortable for opponents. It’s difficult to understand why he hasn’t been given a shot at the NHL level by a Ducks team screaming out for offence.

On the team side, the Florida Panthers and Los Angeles Kings are tied for the lead with four players each in the top 50.

The Montreal Canadiens and Vancouver Canucks lead the way for Canadian teams with three players each in our top 50.

The Habs have Russian defenceman Alexander Romanov (No. 19), American centre Ryan Poehling (No. 36) and Canadian winger Nick Suzuki (No. 39), while the Canucks have Hughes (No. 8), centre Adam Gaudette (No. 41) and goaltender Thatcher Demko (No. 46).

The Ottawa Senators are represented by two players – right wing Drake Batherson (No. 23) and left wing Alex Formenton (No. 25). The Maple Leafs (defenceman Rasmus Sandin at No. 26) and Jets (left wing Kristian Vesalainen at No. 22) have one player each in the rankings. The Oilers and Flames don’t have any players in the top 50.