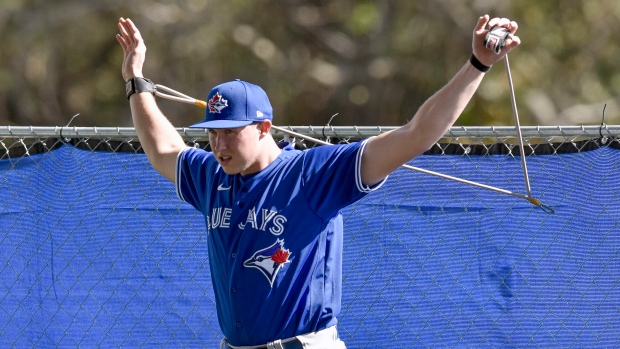 Toronto Blue Jays right-hander Chase Anderson's oblique injury could open the door for one of baseball's top prospects to open the season in the team's starting rotation.

Pitching coach Pete Walker says Nate Pearson, who has been working his way through the minor leagues since being taken by the Blue Jays 28th overall in the 2017 draft, is in a battle to break camp in the rotation.

The early reviews at summer camp at Rogers Centre are overwhelmingly positive.

"There's a little bit of a rotation battle with a spot that Chase probably won't be ready for to take out of the chute."

The Blue Jays announced Sunday that Anderson was day-to-day with an injury he suffered while warming up prior to a recent batting practice. Anderson played catch Monday, with Walker reporting no problems during that session.

Hyun-Jin Ryu, Matt Shoemaker, Tanner Roark and Trent Thornton are considered the front-runners to be in the starting rotation when the 60-game season begins July 24 at Tampa Bay.

Pearson could be battling with Ryan Borucki, Anthony Kay, Thomas Hatch and Shun Yamaguchi for the fifth spot, at least to start. While many felt Pearson would start the original 2020 campaign in triple-A Buffalo, there will be no minor-league play this season because of the COVID-19 pandemic.

Pearson spent most of last season with double-A New Hampshire, going 1-4 with a 2.59 ERA while striking out 69 and walking 21 in 16 starts. He finished the season with Buffalo, where he went 1-0 with a 3.00 ERA in three starts.

"We got a chance to see him in spring training, so it was exciting," Walker said. "I can't lie, it was fun to watch. All eyes are on him so to speak when he's out there. He definitely draws attention and made some big-league hitters look pretty bad at spring training."

As for the bullpen, Walker had high praise for Rafael Dolis, who signed with the Blue Jays this off-season after spending four years in Japan.

"He's got some weapons to pitch in this league and pitch effectively late," Walker said.

Ken Giles is the expected closer, and Walker mentioned Markham, Ont., native Jordan Romano and Anthony Bass as possiblities for other high-leverage roles.

Ryu, the Jays' big free-agent acquisition, is expected to start on opening day.

"There's really not one pitch he's struggling with right now, they all seem to be working fine," Walker said of Ryu, who was second in National League Cy Young Award voting last year as a member of the Los Angeles Dodgers.

This report by The Canadian Press was first published July 13, 2020.