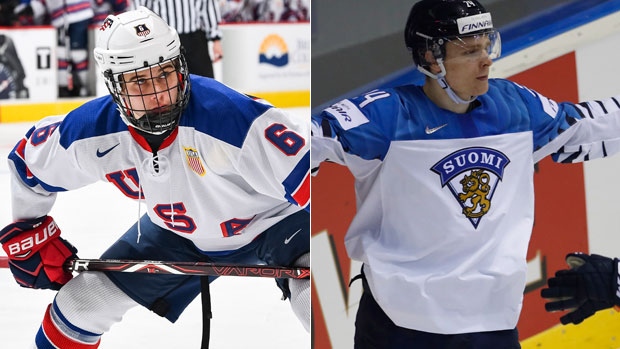 If the expected script plays out at the NHL draft, the two potential future stars know their stories will be intertwined for years to come.

Hughes and Kaapo are on course to be selected No. 1 and No. 2 at Rogers Arena on Friday, with the New Jersey Devils and New York Rangers owning the first two selections.

"It's right here," Hughes said during a noon-hour media availability with fellow prospects on the top deck of a yacht in Vancouver's Coal Harbour neighbourhood. "When you close your eyes that's what you're thinking about.

"Now that it's finally here, I'm going to enjoy it."

But although Hughes and Kakko will be forever linked, the pair are a lesson in contrasts.

The former is a five-foot-10, 170-pound American-born centre with slick hands, while the latter is a powerful Finnish winger that already looks like a man at six foot two and 194 pounds.

"This is a new thing," said Kakko, who is working to improve his English. "It's coming, great day for me."

The 18-year-old Hughes put up a record 154 assists and 228 points over the last two seasons with the U.S. National Team Development Program. Kakko, also 18, scored 22 goals — a record for a draft-eligible prospect — and added 16 assists in his country's top professional division in 2018-19.

Hughes said having their career paths compared and dissected should be interesting.

"You saw (Alex) Ovechkin and (Sidney) Crosby do it," Hughes said. "I'm not saying we're going to be Ovechkin and Crosby, but I'm saying it's going to be pretty cool to be linked like that."

Hughes was born in Orlando, Fla., but spent his formative years in the Toronto area when his father worked for the Maple Leafs.

The younger Hughes, who registered 112 points in 50 games with the USNTDP in 2018-19 and is the brother of Vancouver Canucks defenceman Quinn Hughes (seventh overall in 2018), is looking to become the eighth American-born player to go No. 1 and the first since Toronto took Auston Matthews in 2016.

"He's a really nice kid," Matthews said of Jack Hughes earlier this week. "Everybody has seen tape and goals that he's scored, just plays that he can make, he looks to be like a really special player.

Kakko, meanwhile, has already won three gold medals internationally, including scoring the winning goal for his country at the 2019 world junior hockey championship in Vancouver before helping the Finns capture the recent men's worlds in Slovakia.

Dan Marr, the NHL's director of Central Scouting, said the choice between the two stud forwards could come down to personal preference.

"(Kakko's) a little more physically developed," Marr said. "That dictates the type of game he's capable of playing, the situations he can be used in, the results that he gets. Skill levels, smarts, skating, you go down the whole list of boxes to check off, and he has those.

"Jack comes across more as that skilled elite forward, where you play the game with speed, quickness ... it's going to be hard to say down the road who's going to be better than who because they're both going to bring different things to the table."

Vancouver Giants defenceman Bowen Byram could be the first Canadian to come off the draft board at No. 3 to the Chicago Blackhawks.

"I'm trying not to worry about things," he said. "I did all I could do.

"Now I just kind of get to sit back and relax and whatever happens, happens."

Lethbridge Hurricanes centre Dylan Cozens, meanwhile, is primed to become the first player ever from Yukon to be drafted in the first round.

Edmonton own the highest pick among Canadian NHL teams at No. 8, followed by Vancouver (10th), Montreal (15th), Ottawa (19th), Winnipeg (20th) and Calgary (26th). Toronto isn't slated to step to the microphone until Saturday's second round at No. 53.

All the highly-touted prospects will be long gone by then, with the USNTDP looking primed for a banner night during Friday's first round.

Apart from Hughes, centres Alex Turcotte and Trevor Zegras, as well as wingers Cole Caulfield and Matthew Boldy, all figure to potentially go in the top-10. Ten members of the program are slotted in among NHL Central Scouting's top-50 players in North America, not including Spencer Knight, the continent's top-ranked goalie.

Heading into Rogers Arena, the USNTDP has never had more than three players selected in the opening round immediately following their two-year terms in Plymouth, Mich.

But Friday will be remembered for Hughes and Kakko.

And both know no matter which player's name is called first, this is just the beginning of their journey.

"We'll be linked together for a long time — Devils, Rangers," Hughes said. "It should be pretty cool. It should be a lot of fun."