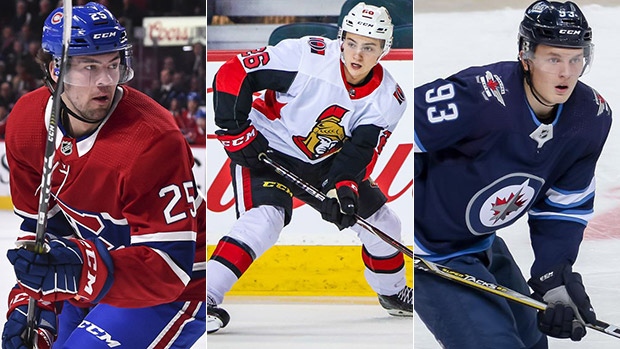 There’s about a month to go until the NHL’s regular season arrives, but you won’t have to wait nearly that long to see some of the league’s top young prospects.

Erik Brannstrom, Nick Suzuki, Ryan Poehling, Ville Heinola and Kristian Vesalainen will be in action as the annual Rookie Showcase Tournament kicks off Friday in Belleville, Ont. The tourney features three NHL teams – the Ottawa Senators, Winnipeg Jets and Montreal Canadiens – and will run from Sept. 6 to 9 at CAA Arena.

Catch four tournament games beginning with the Senators and Jets Friday evening at 7 p.m. ET/4 p.m. PT streaming on TSN.ca, the TSN App and on TSN Direct with no blackout restrictions.

“We are thrilled that the Senators, Canadiens and Jets have all agreed to showcase their prospects at CAA Arena in what will most certainly be a memorable weekend of hockey in the Bay of Quinte region,” said Belleville Senators chief operating officer Rob Mullowney in a news release.

The Senators will be led by AHL affiliate Belleville head coach Troy Mann, who believes the weekend will be good experience for the organization’s prospects.

“A good percentage of this weekend’s roster have already or will ultimately play in Belleville. It’s an opportunity for them to get acclimated to the city, the facilities and the routine of what comes with playing in the AHL here as well as introduce themselves to the fans,” Mann said.

Last year, young stars including Brady Tkachuk, Jesperi Kotkaniemi, Alex Formenton and Drake Batherson took part in the three-team tournament in Laval, Que. Both Formenton and Batherson will be back this time around.

Here is the full broadcast schedule: