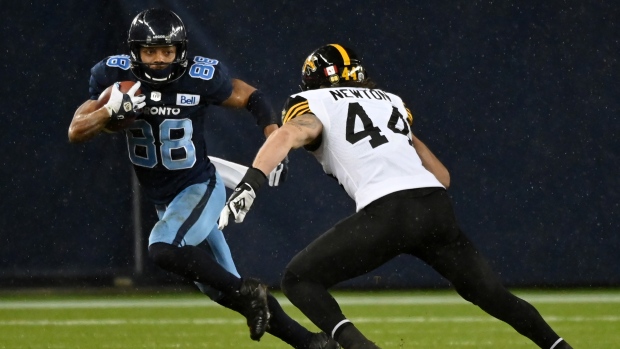 TORONTO — Kurleigh Gittens Jr. and the Toronto Argonauts will carry home-field advantage into the CFL playoffs.

Gittens, Antonio Pipkin and Chris Edwards scored touchdowns as Toronto defeated the Hamilton Tiger-Cats 31-12 on a windy Friday night to cement top spot in the East Division. That secured the Argos (9-4) home-field advantage for the East Division final Dec. 5 and that's a big deal considering they're 6-0 at BMO Field this year.

"It's home, who doesn't like home," Gittens Jr. said. "For us it's a pleasure to play in front of our fans.

"We just try to come out every home game and put on a show for these guys, they deserve it. Every chance we get to play at home we expect to play well."

Toronto played before a season-high gathering of 10,851 Friday night that braved a steady wind throughout and rain in the opening half. The Argos gave them plenty to cheer about, earning a third straight win and finishing the regular season 3-1 versus archrival Hamilton (7-6).

Toronto completes its regular season Tuesday night hosting the Edmonton Elks (2-9). The Argos will return 19 days later to face either Hamilton or the Montreal Alouettes for a berth in the Grey Cup game Dec. 12 at Tim Hortons Field.

Gittens registered seven receptions for 72 yards - both team-highs - as Toronto's offence held the ball for over 33 minutes. Starter McLeod Bethel-Thompson finished 26-of-34 passing for 250 yards with a TD and interception.

Gittens felt Friday's performance was the Toronto offence's most complete this season.

"I think we played as a whole as an offence," he said. "We really played together."

"This is (the) best performance we've had all year and I think it was just our focus," he said. "I felt good about this game going into it just because of the work week, guys were dialed in.

"We're not happy. We've got to be better but I thought it was a pretty solid outing by our guys."

Hamilton suffered its first loss in four games and finishes its regular season next Saturday hosting the Saskatchewan Roughriders (8-4). And that could be a monumental game for the Ticats depending on how third-place Montreal (6-6) fares against the Winnipeg Blue Bombers (11-1) on Saturday.

Montreal completes its regular season next Friday by hosting the Ottawa Redblacks (2-11).

Hamilton and Montreal split their season series 1-1 but the Ticats own the tiebreaker based upon point differential. So they'd finish ahead of the Alouettes if the two teams ended up tied in the standings.

Dinwiddie wouldn't be surprised if Toronto faced Hamilton again in the playoffs.

"Well, they've been the best team in the East the last few years and I think there's a reason why," he said. "They're a darn good football team, so is Montreal (and) we'll see how that plays out.

"You never know in the playoffs but they're a darn good team ... so we're probably going to see them again."

Toronto did well in the second and third quarters with the brisk wind at its back. Hamilton got the advantage to open the fourth at the Argos' 40 trailing 17-3 but on its second offensive play starter Jeremiah Masoli was intercepted by Jalen Collins, Masoli's first pick in 166 pass attempts.

That set up Bethel-Thompson's 12-yard TD strike to Gittens at 4:50 to give Toronto a commanding 24-3 advantage. Hamilton's Taylor Bertolet missed a 35-yard field goal attempt at 8:20 for a single.

Dane Evans scored on a one-yard TD run at 13:11 before Masoli found Sean Thomas Erlington on the two-point convert to cut Toronto's lead to 24-12. But Edwards recovered the onside kick with 1:46 remaining then completed the scoring with a 78-yard interception return touchdown at 14:58.

"They played better than we did, that's the bottom line," said Hamilton head coach Orlondo Steinauer. "I thought we played decent in spots but, boy, you're not going to beat a lot of football teams playing the way we played."

Masoli finished 22-of-40 passing for 326 yards with two interceptions while Tim White had five receptions for 110 yards.

Bede's 39-yard field goal on the final play of the second quarter staked Toronto to a 14-0 halftime lead as the Argos scored all of their points in a rainy opening half with the wind.

Pipkin scored the opening half's lone TD on a one-yard run at 13:42 that was set up by Chandler Worthy's 37-yard punt return to the Hamilton 35-yard line. Before Bede's successful convert, Hamilton linebacker Jovan Santos-Knox was ejected for rough play.

Hamilton struggled offensively in the first half but especially going into the wind in the second. Five times Masoli attempted passes of 40-plus yards, but failed to connect while another pass was dropped by a Ticats receiver.

"They've always taken shots on us," Dinwiddie said. "They missed a bunch early on so they were aggressive but we weathered the storm and didn't give up too many big plays."

Masoli was much more effective running (two carries, 34 yards) than passing (6-of-17 for 40 yards) in the opening half. Bethel-Thompson completed 15-of-20 attempts for 148 yards with an interception.