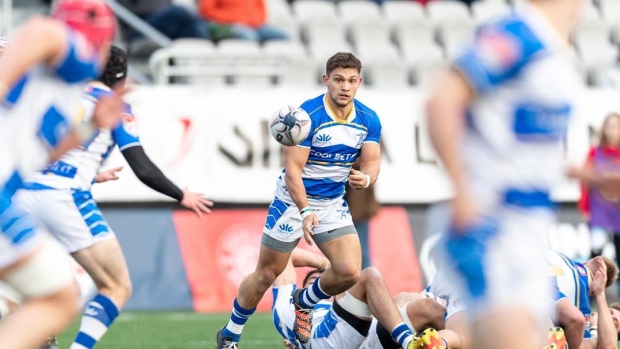 TORONTO — With three games remaining, the Toronto Arrows are at the business end of their regular-season schedule with points at a premium.

The Arrows (7-6-0, 35 points) stand fourth in Major League Rugby's Eastern Conference, one place and seven points out of a playoff berth.

The good news is Toronto can make strides on the teams above it, starting Thursday with the visit of the East-leading New England Free Jacks (12-1-0, 56 points). The Arrows visit third-place Rugby ATL (8-5-0, 42 points) on May 28 before closing out the regular season June 5 against visiting Old Glory D.C. (2-11-0, 16 points) which occupies the East basement.

The No. 1 seeds in the Eastern and Western Conference get a first-round playoff bye, awaiting the winner of the matchup between the No. 2 and No. 3 seeds in each conference. New England has already clinched a playoff spot but will be looking to put further distance between it and No. 2 Rugby New York (9-4-0, 47 points) to secure the first-round bye.

The fact that Toronto can still make a playoff push is pretty remarkable given the injury problems the team has had this season.

As Arrows COO and GM, Mark Winokur is in charge of filling the roster holes. He says 15 players unavailable for selection was the record this season.

"I've never seen anything like it," Winokur said of the injury bug among scrum halves. "It's not something you can prepare for, unfortunately. So you just have to try and come up with strategies to deal with it on the spot."

Braude, the starter, is now back with 19-year-old Reimer as his backup. The 33-year-old Mackenzie, an original Arrow, was lured out of the broadcast booth last week as insurance.

Injuries have been a constant since the Arrows, back home in Toronto after a 2021 season spent in the Atlanta area due to pandemic-related travel restrictions, started the season in early February.

Seven straight away games — one of which was designated as a home match but was played in Langford, B.C. — added to the stress.

Winokur says the medical reasons have been varied, including COVID-related absences.

"It's been a bit of everything — and a lot of unbelievably bad luck," he said.

With a roster normally numbering 33 to 38, there is little room for error especially with fielding a matchday 23. The roster on the Arrows website currently numbers 47 players although some like McRorie, Di Nardo and Canadian sevens player Brock Webster have already come and gone.

It helps that Winokur and the Arrows are close to Rugby Canada and have a good handle on available Canadian rugby talent. Bringing in imports is not easy with visa issues. And Winokur knows all about red tape, given the team relocating to the U.S. last year.

The Arrows payroll started at US$515,000, with opportunities to add to it by trading assets or meeting academy requirements under league rules.

"It's still not a large variant," Winokur said of the mechanism to up the total. "You've got what you've got."

Salaries for players with season-ending injuries are covered by insurance. Not so for short-term issues. At times the cupboard was bare in terms of available payroll so Winokur had to make do with what he had.

Winokur blames the injuries on a combination of circumstances. Long lockdowns in Canada did not help player conditioning in the off-season — especially those not with the squad last year given they had little chance to play rugby north of the border.

Thursday's game is the third in 12 days for the Arrows, with coach Peter Smith making plenty of changes to the squad that thumped the expansion Dallas Jacks 57-0 last Saturday at York Lions Stadium.

Toronto will field entirely new front and back rows with Cole Keith, Andrew Quattrin and Isaac Salmon slotting into the front row and Kyle Baillie, Ronan Foley and Lucas Rumball in the back row.

Captain Mike Sheppard, in the second row, and fly half Sam Malcolm also return to the starting 15 with Ueta Tufuga and Mitch Richardson starting in the centres.

The matchday 23 still features 11 internationals: 10 from Canada and Gaston Meares from Uruguay.

The Arrows are 0-3-0 all time against the Free Jacks, including a 21-15 loss in snowy conditions March 12 at Veterans Memorial Stadium in Quincy, Mass.

The match marks just the second time the Arrows have played on a Thursday. Toronto win the first occasion, defeating the then-Austin Elite (now Austin Gilgronis) 29-13 on May 9, 2019.

This report by The Canadian Press was first published May 18, 2022