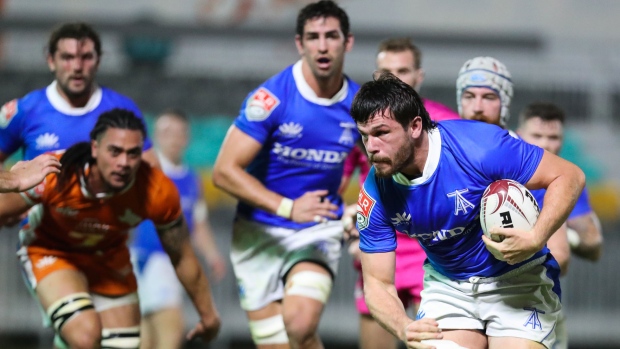 It was the Arrows' first victory since March 1, 2020, when they beat Rugby ATL 28-18. Toronto was 4-1-0 when the season was cancelled last year due to the pandemic.

Tyler Rowland, Manuel Diana, Ben LeSage, Gaston Mieres and Jason Higgins scored tries for Toronto (1-2-0), which led 18-7 at the half. Tayler Adams kicked three conversions, a penalty and a drop goal and Will Kelly added a penalty.

The game at Segra Field, limited to some 700 fans in the stands, marked the first-ever contest between the two teams.

Toronto, which has made suburban Atlanta its base this season, arrived in need of a win after road losses at Rugby ATL (21-14) and the Utah Warriors (39-24).

Old Glory opened the season with a 26-26 tie at NOLA Gold before defeating Rugby ATL 30-23.

Rowland, with Argentine prop Gaston Cortes still serving a suspension, and scrum half Ross Braude both made their first MLR starts for the Arrows. The 21-year-old Braude was born in South Africa but qualifies for Canada through his father.

Toronto's match-day 23 included 18 Canadians and featured 12 full internationals (eight from Canada and two each from Argentina and Uruguay).

A pair of Canadians started for Old Glory with Doug Fraser at inside centre and former Arrow Luke Campbell at flanker. But veteran Canadian back Ciaran Hearn was unavailable after being injured last week against Atlanta.

Mike Dabulas started for the injured Jason Robertson at fly half for Old Glory.

Old Glory started well but an early attack stalled near the Arrows goal line via a penalty. Toronto took advantage with a pair of tries in the 10th and 13th minutes.

A rolling maul produced the first try by Rowland after Old Gory was pinned deep in its own end by a pair of penalties. Diana, after a run by LeSage, broke a few tackles down the left flank to touch down for a converted try that made it 12-0.

Adams extended the lead to 15-0 with a 19th-minute penalty. Palamo, a former defensive end at the University of Utah whose father Arona Palamo won nine caps for Samoa, broke several tackles to put the home side on the board with a converted try in the 39th minute. Adams' drop goal on the stroke of halftime made it 18-7.

Toronto kept the scoreboard ticking in the 42nd minute when a line break by LeSage resulted in another converted try and a 25-7 lead. Fa’anana-Schultz powered his way over from close range for an Old Glory try in the 59th minute that cut the lead to 25-12 after Toronto was pinged for offside.

With Old Glory attacking again, Toronto captain Lucas Rumball nipped the threat in the bud with a steal at the breakdown.

The Arrows padded their lead through two quick tries with replacement scrum half Jason Higgins playing a role in both. Higgins set up Mieres in the 66th, grabbing the ball at his bootlaces before passing it to the Uruguayan wing. Higgins then scored himself a minute later.

King added a consolation try for Old Glory, bulling his way over in the dying minutes for a converted try. Kelly added a Toronto penalty with time running out.

This report by The Canadian Press was first published April 3, 2021