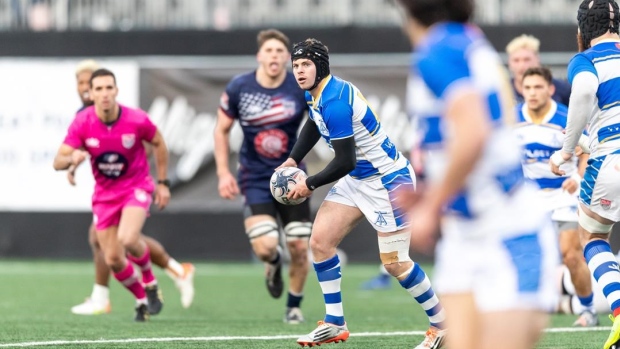 The Toronto Arrows ran in eight tries to trounce NOLA Gold 53-36 in Major League Rugby play Saturday, recording their fourth win in their last five games despite an injury-ravaged roster.

The bonus-point win moved the Arrows (6-4-0, 30 points) into playoff position in third place in the Eastern Conference ahead of idle Rugby New York (6-3-0, 30 points) on superior points differential. Fifth-place NOLA (3-7-0, 19 points) lost its third straight but picked up a bonus point for scoring at least four tries.

After NOLA opened the scoring, the Arrows turned it on. Toronto dominated at the scrum and began to find holes in the visitors' defence. The game turned sloppy in the late stages with the two teams combining for six tries in the last 17 minutes.

Toronto was missing 12 players, down from 14 the week before with Argentine back-rower Tomy de la Vega and Tufuga, a New Zealand-born centre, restored to health. Tufuga started while de la Vega came off on the bench.

Still the Arrows fielded 13 internationals (12 Canadian and one Argentine) in their match-day 23 Saturday.

"We worked really hard on our attack. We had a great training week this week," said Tufuga. "I'm just proud of the boys. We really backed our skills today and, as you can see on the scoreboard, we put a lot of points on them,"

There were more injury concerns for Toronto with back-rower Kyle Baillie, a former NOLA captain, limping off in the 14th minute.

NOLA started with purpose and went ahead in the sixth minute on an attack extended by a missed Toronto tackle. Dolan, the U.S. international No. 8, crashed over the line for a converted try and a 7-0 lead.

A NOLA turnover and penalty after the ensuing restart set the stage for a 12th-minute converted try by Salmon at the back of a driving maul off a lineout.

Malcolm gave Toronto a 10-7 lead with a long-range penalty in the 21st minute. Feakes responded with a 33rd penalty from a Toronto offside penalty to tie it at 10-10.

A handling error led to an Arrows scrum near the NOLA posts and Tufuga, battling through three NOLA players, touched down under the posts in the 36th for a converted try and 17-10 lead. A slashing run by Sheridan produced another Arrows try in the 39th minute.

Richardson took advantage of gaps in the NOLA defence for a try in the 42nd minute that upped the lead to 29-10. And the Arrows kept the scoreboard turning with Keith, off a lineout set play near the NOLA goal-line, went over four minutes later.

NOLA cut the deficit to 36-17 in the 52nd minute with a try against the run of play when Cappiello intercepted a loose Arrows pass and raced the length of the field to score under the posts.

A 58th-minute try by NOLA scrum half Devereaux Ferris was negated on video review for a forward pass.

The Arrows added an opportunistic try in the 63rd minute when du Toit retrieved the ball and scored after a Malcolm penalty attempt hit the post and bounced back into the field of play.

Having played seven of their first 10 games away from home, the Arrows have four of their remaining six at York Lions Stadium. Toronto visits the Houston SaberCats next weekend before a bye week.

The top team in each of the two conferences gets a first-round playoff bye with the No. 2 and 3 seeds meeting to determine who advances to the conference finals to meet them.

Toronto, which downed NOLA 24-23 when the two teams met Feb. 19 in Louisiana, improved to 2-4-0 all-time against the New Orleans side.

This report by The Canadian Press was first published April 16, 2022