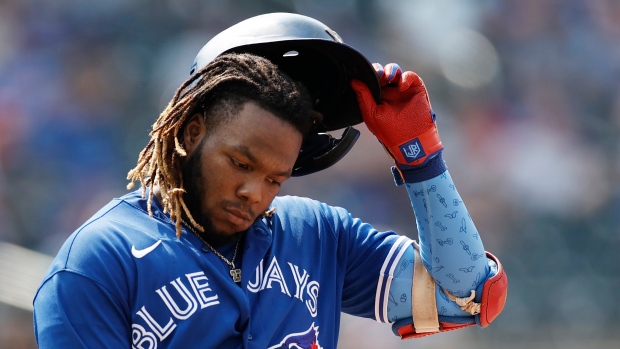 It’s dumbfounding, isn’t it? How can the Toronto Blue Jays’ offence, which was so good early in the season, be struggling so mightily to score now?

Sure, they don’t currently have star outfielder George Springer, who is recovering from a knee sprain. But they found ways to score in the first two months of the year without their big off-season signing.

Unfortunately, this is what can happen over the course of a 162-game season. There are peaks and valleys for individuals and teams. It can happen to even the best of teams, but the better the team, the less the ups and downs of the season affect them. When they don’t pitch, they hit. When they don’t hit, they pitch. You get the idea.

So, what is wrong with the Jays’ offence?

Baseball is a game of adjustments. One of the keys to success is knowing what the opposition is trying to do to you at any given time. The Jays showed a great ability to hit the fastball for the first half of the season. That prompted pitchers to start throwing them more breaking balls and changeups. This shifted the focus of the hitters to think and look for curve balls, sliders, and off-speed stuff.

That shift has gotten the Jays off the fastball from a timing perspective at the plate. Springer (.389), Teoscar Hernandez (.364) and Santiago Espinal (.385) have been the only Toronto players crushing fastballs since the trade deadline. The rest of the lineup has been late on the heater, either swinging and missing or fouling off pitches.

The answer to the offensive problem lies in the hitters getting back to hunting fastballs. That is their strength. They need to look for fastballs until they get two strikes, and then look for the fastball and adjust to the breaking ball or changeup.

The long rebuild in Baltimore

The recent 19-game losing streak of the Baltimore Orioles further casts a negative light over teams going through the rebuilding process.

It adds support to the claim teams that tear themselves down to the ground put a substandard product on the field that is embarrassing to the game at its core. That’s why the Major League Baseball Players Association wants a minimum salary level for teams to have to spend, believing it will eliminate such a low level of play.

The Orioles would argue that this is just part of the process, and that history has shown that it can be a successful path toward building a championship team. They will point to the Astros, Cubs, Royals, Twins and Rays as teams that took huge steps backwards to build a deep farm system and then took monstrous steps forward to the top of the game.

Of course, tearing a team down to the ground is the easy part of the process. The tough part is drafting well, making productive trades, and then developing championship-calibre talent.

It’s nearly impossible to rebuild with young pitching and young position players at the same time. One component of the game is usually more advanced than the other. It seems the Orioles have far more position-player depth than they do pitching right now. At some point they will have to trade to add pitching to balance out their organization.

Time will tell whether general manager Mike Elias, who was hired from the Houston Astros organization, can turn things around. Rebuilding takes time. The first step is upgrading the farm system. A recent ranking by MLB Pipeline has the Orioles' minor-league system as the best in baseball.

It seems there is hope for the future, even when this season things seem hopeless.

The San Diego Padres fired pitching coach Larry Rothschild this week, citing a lack of improvement by some of their young pitchers as well as underperformance from some veterans.

After a couple of seasons of big acquisitions, expectations were enormous this year in Southern California. The Padres were expected to go toe-to-toe with the Los Angeles Dodgers and battle for the top of the NL West. The Dodgers have done their part, while the San Francisco Giants assumed the role of the Padres as an elite team. Now, the Padres are fading.

San Diego acquired Yu Darvish from the Cubs, Blake Snell from the Rays and Joe Musgrove from the Pirates in the off-season. They already had Chris Paddack and Dinelson Lamet as part of the staff, both of whom have big upside when healthy. Darvish was runner-up in the Cy Young race last season. Snell pitched in the World Series last year with the Rays and is a former Cy Young award winner. Musgrove is an underrated, solid number No. 2-type starter. There were big expectations for good reason.

The Padres were in third place in the NL West on June 30 (49-33), just one game behind the Dodgers for the top wild-card spot. They had a 6.5-game lead over the Cubs for the second wild-card spot. Plus, they were just 2.5 games behind the Giants for the division lead.

Now they are 68-61. They are 16 games behind the Giants, who still lead the NL West, and 13.5 games behind the Dodgers. They also trail the Cincinnati Reds, who are now the second wild-card team, by two games. It has been a freefall for the Padres.

The starting pitching has crumbled. Padres starters are 31-36 and have a combined 4.31 ERA, which ranks 10th in the NL. Those are hardly the numbers of a playoff contender.

San Diego’s starters have also thrown the fewest innings of any staff in the league, which has taken a toll on the bullpen. They had the best 'pen in the NL for the first three months of the season, but the workload has started to wear it down. Padres relievers have thrown 45 more innings than the next closest team in the NL.

The lack of starting pitching was obvious at the trade deadline, but general manager A.J. Preller couldn’t land an arm via trade. He lost out on Max Scherzer (Dodgers), Jose Berrios (Blue Jays) and Kyle Gibson (Phillies). Preller has always been a dealmaker but decided the prices were too high. It was surprising, considering the Padres have had one of the most respected farm systems over the past several years and have a desperate need.

Not only have the Padres fallen out of a playoff spot, but they also have a very difficult schedule remaining. Of their 33 games remaining, 25 are against teams over .500. They have their work cut out for them.

- Among American League playoff contenders, only the Astros and Rays don’t have a bullpen/closer issue. The Astros have Ryan Pressly and Kendall Graveman, acquired from Seattle at the trade deadline. The Rays have had 11 different pitchers get saves this year. Manager Kevin Cash finds the best matchups late in the game and lines his relievers up as needed.

Yankees closer Aroldis Chapman has been a mess for about a month. Matt Barnes in Boston has a 12.27 ERA over the past 30 days with three losses and two blown saves. Oakland’s Lou Trivino has a 9.64 ERA over his past 15 days and has two losses. Jordan Romano has been decent in the closer role for the Jays as he has replaced Brad Hand (acquired from Nationals), who got a look in the role after the trade deadline. The Mariners are using Paul Sewald as their closer since they traded Graveman to the Astros. He has done well but is very inexperienced.

- The Red Sox have gotten ace lefty Chris Sale back from Tommy John surgery.  He has made three starts and has been excellent since returning. He went five innings in each of his first two starts and 5.1 innings in his third. He has only allowed four earned runs (2.35 ERA) while striking out 21 in his 15.1 innings.  Plus, he has gotten the win in all three games. The Sox have been able to pitch him every sixth day instead of every fifth day. It will be interesting to see if he can maintain his stuff and bounce back as a regular in the rotation. That is asking a lot after surgery.

- The Philadelphia Phillies are in second place 5.5 games behind the Atlanta Braves in the NL East. The Phillies' chances of catching the Braves all but came to an end on Thursday when they lost Rhys Hoskins to season-ending abdominal surgery and Zach Eflin was scratched from his start due to lingering knee issues that flared up again. Eflin was activated from the IL to start the game on Thursday but had to be scratched from his start because his knee acted up again. The Phillies' season is over because of these losses.

- The Yankees have won 12 straight games. They haven’t lost since the game in the cornfields in Iowa, which was their toughest loss of the season. They showed a ton of character after blowing the ‘Field of Dreams’ game. They won the next two in Chicago against the White Sox and haven’t stopped since. They have been particularly good in games decided by one or two runs. They have played the most such games (71) and they have the most wins as well (48-23). One of the reasons for their success is that they are finding ways to manufacture runs. The Yankees have stolen 13 bases over the past 15 days. The Bronx Bombers aren’t just about power these days.