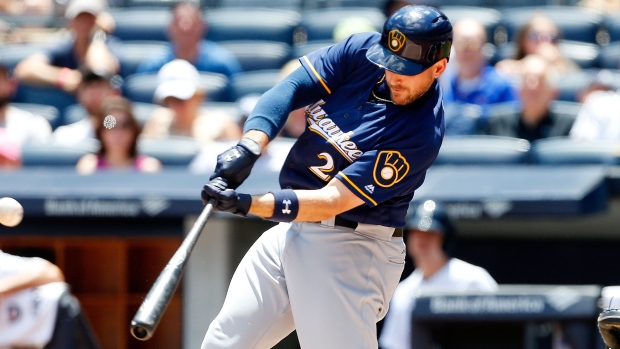 TORONTO — The Toronto Blue Jays are betting a Travis Shaw bounce back is the solution to their first base problem.

With no obvious internal answer and the club committed to Vladimir Guerrero Jr. at third base next season, the Jays agreed to terms with Shaw on a one-year, $4 million contract Sunday, according to a source.

The deal is pending a physical and also includes performance bonuses for plate appearances that could earn Shaw an additional $675,000.

Coming off the worst season of his career, one that forced the Milwaukee Brewers to non-tender the 29-year-old infielder earlier this month rather than pay him around $5 million in salary for 2020, the Blue Jays believe Shaw is closer to the 30-homer left-handed bat he was in 2017 and 2018 than one of the worst hitters in baseball, which is exactly what he was this past season.

But prior to cratering in his age-29 season, Shaw had been worth a total of 7.1 fWAR — 3.5 in ’17 and 3.6 in ’18 — and had posted back-to-back 30-homer campaigns for the Brew Crew, helping further the nickname Mayor of Ding Dong City, a moniker given to him during his time with the Boston Red Sox, the club that drafted him in the ninth round of the 2011 draft out of Kent State University.

With the Brewers pivoting to former Blue Jay Justin Smoak at first base this week, the Jays and Shaw were an obvious match.

If Shaw can rediscover his stroke in 2020, he’ll help lengthen a Blue Jays lineup that has just one other left-handed hitter, Cavan Biggio, slated to hit in the top half of manager Charlie Montoyo’s lineup.

The plan is to play Shaw at first base almost every day, but he can also move around to third base — his best position at plus-26 Defensive Runs Saved over his career — and second base on occasion.

That versatility gives Montoyo the ability to use Guerrero Jr. more as the DH, especially if versatile infielder Brandon Drury struggles with the bat in spring training and doesn’t make the club.

Another aspect drawing the Jays to Shaw is the fact he’s still arbitration eligible in 2021, giving them another year of team control at a reasonable cost if he does, indeed, rebound.

If that happens, you could make the case it would be in the best interest of the club to flip-flop Shaw and Vladdy Jr. by opening day 2021 in order to make the most out of the veteran's glove and let the kid start getting used to the spot most believe will end up being his long-term position in the not so distant future anyway.

Even with the versatility, cheap price tag, and past history of big-league production, Shaw, unsurprisingly, does come with some warts.

According to Statcast data, Shaw swung through more fastballs than ever before last season, struggling to a .164 batting average and a .328 slugging percentage on heaters, whiffing on 29.2 per cent of them.

With 82 of his 99 career homers coming off right-handers, Shaw should also be stapled to the bench when the Jays are facing a left-hander next season.

On the flip side, however, his career .810 OPS and 111 wRC+ against righties shows he’s capable of above average production on most days.

Despite the financial decision the Brewers made, even GM David Stearns saw better days ahead of Shaw.

“Travis had a really rough year and he’d be the first person to say that,” Stearns said at his year-end presser. “I know he was not pleased with his performance this year. He believes he’s a better player than that. I certainly believe he’s a better player than that. We’ve seen that from him previously. We’ve seen a player who can contribute at a really high level consistently over multiple years.”

That’s what the Jays hope they’re getting at a buy-low rate.

The addition of Shaw hurts Rowdy Tellez’s chances to improve on his 21-homer rookie campaign, but there might still be DH at-bats available for the left-handed hitting 24-year-old against right-handed pitching, although the Jays have been internally discussing the idea of a reunion with fan favourite Edwin Encarnacion.

Shaw’s signing doesn’t necessarily put an end to that, as Encarnacion could handle DH duties and slide to first base on days Shaw sits against lefties, but rotation upgrades and finding an everyday centre fielder are still priorities.

The impact moves promised by the Jays front office have yet to come to fruition this winter, but adding Shaw — their first move to upgrade the lineup this off-season — has a chance to provide sneaky good value in a number of ways next summer.​