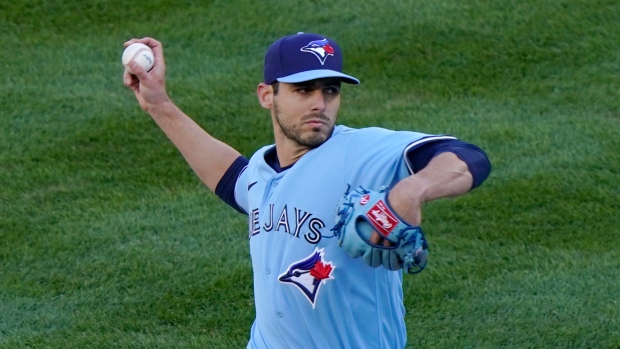 Reliever Julian Merryweather threw just two pitches and didn't come back out for the ninth inning in what would have been a save situation Tuesday night against the New York Yankees.

Toronto Blue Jays manager Charlie Montoyo told reporters after the game that Merryweather was pulled early because of left hip irritation. He did not have an additional update on Merryweather's status going forward.

Julian Merryweather is dealing with left hip irritation, per Charlie Montoyo. He doesn’t know much more than that at this point.#BlueJays

The hard-throwing righty will be evaluated on Wednesday.

Meanwhile, fellow reliever David Phelps was also forced out of Tuesday's game after Yankees outfielder Clint Frazier lined one right back up the middle and off Phelps' back, ending the right-hander's day after just five pitches. The baserunner came around to score later in the inning, charging Phelps with an earned run.

Montoyo said Phelps was dealing with a back contusion. He will also be re-evaluated on Wednesday.

Toronto went on to win the game 6-3 and will conclude their series with the Yankees Wednesday afternoon before flying to Kansas City to begin a four-game set with the Royals.