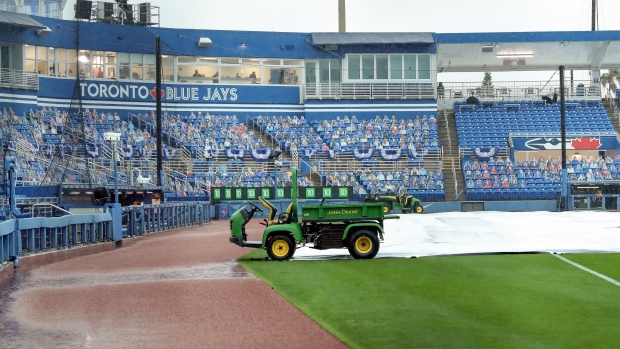 DUNEDIN, Fla. — The game between the Los Angeles Angels and Toronto scheduled for Sunday at the Blue Jays' temporary home in Florida was postponed because of rain.

The game will be made up as part of a split doubleheader on Aug. 10 at Anaheim, California.

This game at the Blue Jays' spring training site never started and was called after a two-hour wait.

While the Angels plan to have Sunday's scheduled starter, Alex Cobb, start on Monday night at Kansas City, Toronto is getting a major addition to its rotation with the return of Robbie Ray.

Ray, out with an elbow contusion, will take the mound against the New York Yankees in the first of three series between the AL East contenders.

Tanner Roark, who had been scheduled to pitch Sunday, was moved to the bullpen.

“He's a little bit sore today,” Maddon said. “Let's see what he looks like tomorrow and work from there. There was no immediate concern that it's going to be an IL kind of a thing but it could be. I'm just not sure right now,”

The rainout followed the Blue Jays’ 15-1 win over the Angels on Saturday night that ended after 1 a.m. It was delayed 2 hours, 38 minutes, by rain at the start and featured a strong storm that produced wind gusts of 40 to 45 mph. The game lasted 3:21 and ended 12 hours before Sunday’s scheduled first pitch.

The radar at the time of the postponement showed additional bad weather extending well into the nearby Gulf of Mexico.

Due to COVID-19 protocols in Canada, the Blue Jays are playing their first three homestands through May at their spring training facility.

Angels: OF Dexter Fowler has a torn ACL in his left knee that requires season-ending surgery. Fowler was hurt when he took an awkward step on second base in Friday night’s game. ... Shohei Ohtani (blister) could have a bullpen session Monday. He had his scheduled pitching start this weekend pushed back.

Blue Jays: OF George Springer (quadricpes) is progressing but has not resumed live batting practice. He will not play in the three-game set with New York. “We have to be patient and careful,” Montoyo said.

Angels: Cobb (0-0) starts against the Royals.

Blue Jays: Ace Hyun Jin Ryu and Ross Stripling will also start in the series with the Yankees.

Sunday's game between the Toronto Blue Jays and Los Angeles Angels has been postponed due to rain in the Dunedin, FL area. The game will be made up as part of a doubleheader on Aug. 10 in Los Angeles at Angels Stadium.