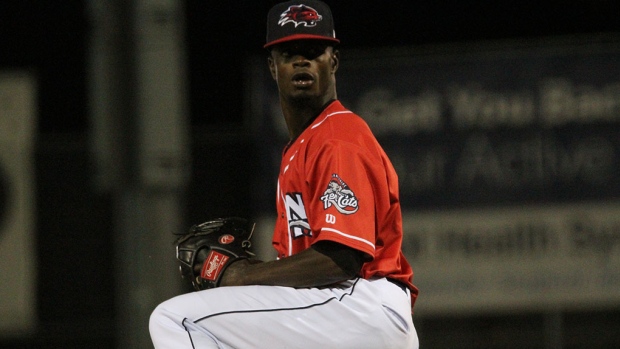 The Toronto Blue Jays passed on their pick in the Major League portion of the Rule 5 Draft and lost pitcher Dany Jimenez to the San Francisco Giants on Thursday.

#BlueJays pass with the 5th pick in the Rule 5 draft.

The 25-year-old appeared in 25 games last season at the AA level for the New Hampshire Fisher Cats and posted a 2-2 record with a 1.87 ERA and 46 strikeouts in 33.2 innings.  He also picked up six saves.

Jimenez also made played in 20 games in A ball for the Dunedin Blue Jays and went 5-1 with a 3.55 ERA, adding four saves.

Blue Jays director of player development Gil Kim told TSN’s Scott Mitchell in September that Jimenez made improvements to his game in 2019.

“Dany took some big steps forward this season, as he was able to better harness his athleticism and live arm,” said Kim.  “His fastball has a lot of life, and with improved fastball control, his power breaking ball was able to help him strike more hitters out.”

The Jays selected Hobie Harris from the New York Yankees in the Minor League portion of the Rule 5 draft, they lost Brock Stewart to the Chicago Cubs, Jose Espada to the Boston Red Sox and Danny Young to Cleveland.