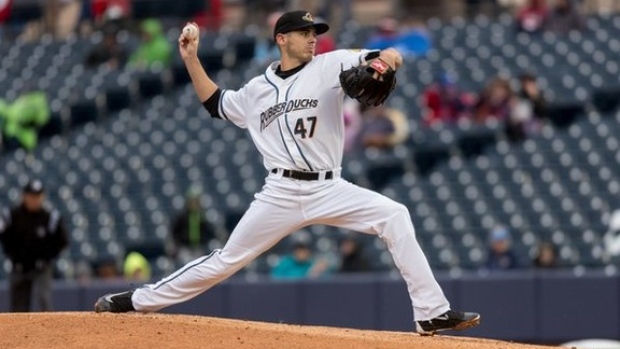 He’s not trying to prove anything to anyone at this point.

Normally, a young prospect would hear the chatter or see the social media opinions.

The Josh Donaldson trade was a fiasco, and the Toronto Blue Jays got nothing in return for a franchise icon who rediscovered his form once he got outside the walls of Rogers Centre.

“Who did the Blue Jays get in the Josh Donaldson trade?” was a popular Google search when the MLB postseason started earlier this month.

“None of that Instagram or Twitter stuff, so I’m kind of off it,” Merryweather says as he leans on the dugout rail of a completely empty Salt River Fields at Talking Stick, spring training home to the Colorado Rockies and Arizona Diamondbacks. “It keeps my head clear, for sure. It doesn’t really affect me much hearing about it and questions about it don’t really bother me. It’s part of it. It was definitely a cool experience to be a part of that trade and I’m hoping to have it pay off for the Blue Jays coming up.”

With that said, he’s not going out of his way to prove Ross Atkins & Co. right.

“I would never put it in those words, per se,” Merryweather says. “I’m not trying to prove myself against a guy like Donaldson. It’s more about being the best version of me and going out and executing what I can execute. I know it’s going to be beneficial for both sides and that’s my focus.”

It’s not a mature-beyond-his-years way of looking at things.

Merryweather is actually is mature.

Not exactly the typical age of a prospect showing up in the talent-rich Arizona Fall League to attempt to put the finishing touches on his climb to the big leagues.

The 6-foot-4 right-hander actually isn’t the oldest player pitching in the AFL this fall — that title belongs to Diamondbacks lefty Miguel Aguilar, who was born 19 days before Merryweather’s Oct. 14 birthday — but he’s one of only seven arms born prior to 1993.

“I tell them the old man strength is definitely helping me,” the likeable righty grins. “Watch out. Give it a few years and maybe you guys can measure up. We joke about it. It’s fun. I’ve had a long road, a long journey. I was drafted as senior out of college anyway, so I’ve always kind of been the older guy of the group. These guys keep me young.”

But Merryweather isn’t in unseasonably warm Arizona to impress or worry about results against younger competition.

It’s all about getting some reps and finishing off another lost season on a high note in order head into the off-season in the right state of mind.

In addition to being drafted as a college senior in the fifth round by the Cleveland Indians in 2014, the reason Merryweather is so behind is the fact his last two seasons have been completely scrapped by elbow injuries.

It started with his Tommy John surgery in March of 2018, but unexpectedly continued with a number of setbacks this season, including one that shut him down completely after a June 29 rehab outing with High-A Dunedin.

The next three-and-a-half months were spent trying to get back to this point.

“It’s a long road,” Merryweather says. “Coming back in 2019, I felt really good in spring training. Dealt with a few setbacks early that kind of pushed me back to, maybe, a mid-year start for me, and then had another setback, which kind of derailed the whole year, unfortunately. Just knowing that I’m in good hands, trusting the process and being on the same page with all the staff in Toronto as well as my surgeon, kind of put me at ease with everything. There was no rush to get me back. They want me healthy and 100 per cent, that’s the main thing.”

Vaguely described by the Blue Jays as soreness or fatigue in his surgically repaired right elbow, Merryweather spent time consulting with his surgeon, Dr. Keith Meister out of Dallas, about what the next steps should be.

“It was, I guess, a little bit more serious than the everyday soreness,” Merryweather says. “Had to shut it down and being so close, it was tough. I think I was only a start away from getting out to [Triple-A] Buffalo.”

Back in February, the Jays thought Merryweather would eventually be able to push his way into the big-league rotation conversation at some point during the 2019 campaign.

As everyone knows by now, there was ample opportunity for that to happen, as the Jays used a franchise-record 21 different starting pitchers. That rotation ended up pitching to a 5.25 ERA, 22nd overall in baseball and ninth out of 15 American League teams.

Five of the top six rotation ERAs in the AL made the postseason, and the one that didn’t, the Indians, just missed.

While Merryweather was rehabbing in the spring, his velocity increased and there was a cautious buzz surrounding his return, potentially one that included a triple-digit fastball.

All of the strength work he did to build his body up while he couldn’t throw may have been more than the elbow was ready for when he did return to the bump in a game setting.

“My velocity has definitely ticked up, which is another reason possibly for some of the fatigue and soreness being a little bit more than I was used to,” says Merryweather, who has been sitting in the mid-90s velocity-wise during his first two AFL appearances, both one-inning stints. “I think kind of going through that will be beneficial and shutting it down before we got to a point of make or break was smart. I think it’s about conditioning my body to [get used to the newfound velocity].”

Atkins took every chance he could find to talk up his trade acquisition this summer, but it wasn’t all hyperbole.

There’s genuine, albeit guarded, excitement surrounding the package of skills Merryweather brings to the table as a starter.

And make no mistake; he’s still viewed as a starting pitcher by the Blue Jays organization, despite all the obvious health question marks.

“He’s a plus athlete who controls his body well in his delivery,” says Blue Jays director of player development Gil Kim, who’s in Arizona this week to get an up-close look at not just Merryweather but all eight prospects the team assigned to AFL for some more development.

“That allows him to fill the zone with strikes. He controls the strike zone and he also showed pretty good velo, throwing in the mid-90s with a 12-to-6 curveball with good bite, a changeup with good deception, and then a slider that’s been developed well now in the mid-to-upper 80s with late action. He’s showed the combination of athleticism, command, and stuff. For a starting pitcher, we’re excited with that combination.”

The slider has been an area of focus for Merryweather, who hopes to come to spring training with a four-pitch mix and a healthy elbow next spring for the first time in almost two years.

Getting into games in October will help him clear the mental hurdles involved in his return.

Kim and the Blue Jays are confident the big right-hander’s injury issues are behind him.

“There have been a lot of conversations about Julian and ways to keep him healthy, but, really, we can narrow it down to continuing to be in communication with him and continuing to help him with his routines,” Kim says.

“There aren’t any flags here that we’re overly concerned about. There have been some unlucky setbacks, but we’re positive going forward.”

Moving forward and being able to pitch with a healthy right elbow is all Merryweather wants, and he believes the rest will take care of itself from there, starting next February in Dunedin.

“I forgot what that was like,” Merryweather grins. “That’s going to be a lot of fun. Being around the guys and trying to contribute where ever I can and just showing the coaches what I look like healthy is going to be awesome.”