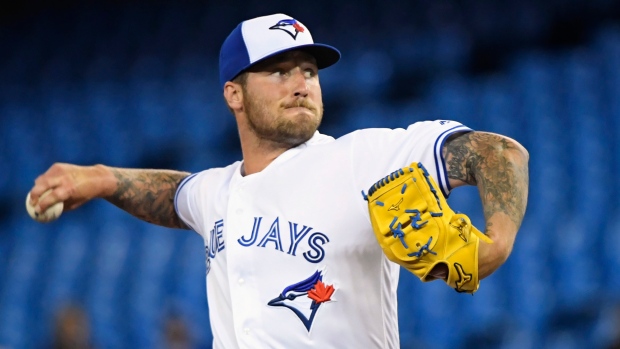 BOSTON — Canadian reliever Jordan Romano is going back to triple-A.

The Toronto Blue Jays optioned the Markham, Ont., native to Buffalo Sunday while recalling right-hander Sean Reid-Foley from the triple-A team. The move was announced before Toronto capped a three-game road series against the Boston Red Sox.

Romano shouldered the loss in his last outing with the Blue Jays on Saturday, allowing a 10th-inning walk-off home run to Red Sox catcher Christian Vazquez in a 7-5 defeat.

The right-hander, who made his MLB debut on June 12, pitched 5 1/3 innings over four games and struck out 11 batters, including Angels superstar Mike Trout during a home game against Los Angeles last week.

Reid-Foley was 3-3 with a 5.87 earned-run average through 13 starts with Buffalo this season. He made one start with Toronto, lasting just two innings and allowing five runs — three earned — against the Baltimore Orioles on April 1.

The Blue Jays are in need of starting pitching after placing right-hander Edwin Jackson on the injured list earlier this week. Jackson had struggled through most of his starts with Toronto this season and went on the IL with a lower-back injury.