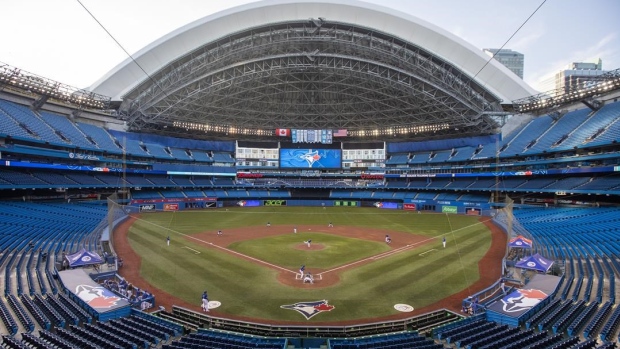 After more than a year of trying, the club was finally able to convince the federal government that they — as well as visiting teams coming to Rogers Centre — would pose no risk to public health.

With vaccine rates rising and border restrictions slowly loosening, the time was right for the feds to issue the National Interest Exemption that paves the way for the Jays to return home July 30 to kick off a 10-game homestand.

Time was of the essence for the Jays and brass put the full-court press on Friday, realizing the already-tight timing of two weeks to move north from their temporary home in Buffalo, where they’ll play out their final homestand at Sahlen Field over the next six days.

Minister of Immigration Marco Mendicino had the final sign off — as he did last July when the club was denied permission to play in Toronto — and did just that late Friday night after a hectic few hours, just as the Jays took the field against the Texas Rangers in their first post-all-star-break game.

Extra safety measures were put in place to get the final stamp of approval.

“The plan contains significant measures to ensure the safety of players, personnel and the public,” Mendicino said in a statement. “This begins with pre and post-arrival testing of everyone, and additional testing four times a week for unvaccinated individuals. It also includes significant limitations on unvaccinated individuals, who will have to have to undergo a modified quarantine, not be permitted to go anywhere but the hotel and stadium and have no interaction with the general public.”

There will also be a designated compliance officer for each team, Mendicino said.

The Blue Jays announced the news to fans via social media first, followed by a team statement.

“First and foremost, the Blue Jays wish to thank Canadians for their unprecedented public health efforts and support for the team,” the statement read. “Without you, Blue Jays baseball would not be coming home this summer.

“In addition, the organization wishes to acknowledge Blue Jays staff and players for their tireless efforts and dedication during a franchise-defining chapter of team history, and whose resilience never wavered through immense challenges and times of uncertainty. Partnership was required across all three levels of government and public health to bring the Blue Jays back to Rogers Centre.”

While players and staff never said much publicly about their unenviable “homefield” situation over the past calendar year, which spans 75 games when all is said and done next week, they were quietly very over their nomad status and looking forward to the comforts and normalcy Toronto will provide them.

Playing in a big-league ballpark again is important too, where the amenities are better, wind isn’t nearly as much of a factor, and they’ll obviously avoid rainouts from here on out.

The Jays will have 36 home games remaining on the schedule when they return, but one is a split-doubleheader in Anaheim against the Angels, leaving 35 scheduled for Toronto.

The Jays last played at Rogers Centre on Sept. 29, 2019, finishing out a 95-loss season in front of the home faithful.

Since then, the Jays have signed Hyun-Jin Ryu, made an expanded postseason, signed George Springer and Marcus Semien, and had four players represent them at the All-Star Game.

In other words, a lot has changed in 22 months.

And now the city will get to take part.