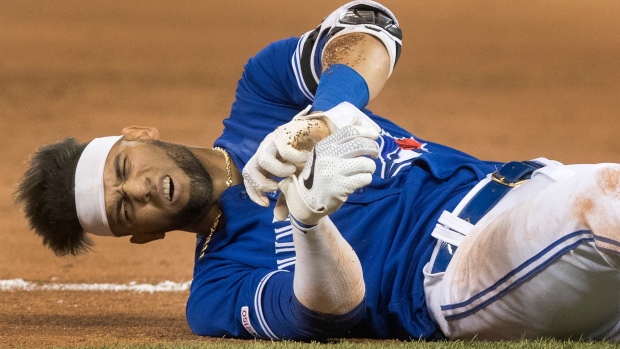 The Toronto Blue Jays announced that an MRI showed the inflammation on outfielder Lourdes Gurriel Jr.'s quad has decreased.

#Bluejays update on Lourdes Gurriel Jr.: MRI showed inflammation in his left quad has decreased. Should progress to running in the next few days.

The team added that Gurriel should progress to running sometime in the next few days.

Gurriel has been out since Aug. 9 because of a left quad strain he suffered while running to first base trying to beat out a ground ball. At the time of the injury, Blue Jays manager Charlie Montoyo said he believed the injury was just a cramp, but it was announced the following day the 25-year-old would hit the injured list with a quad injury.

TSN Blue Jays reporter Scott Mitchell reported last week that Gurriel was targeting a return during the Houston Astros series at the end of the month.

The Jays will finish up their series at Dodger Stadium on Thursday before heading to Seattle to take on the Mariners Friday night.