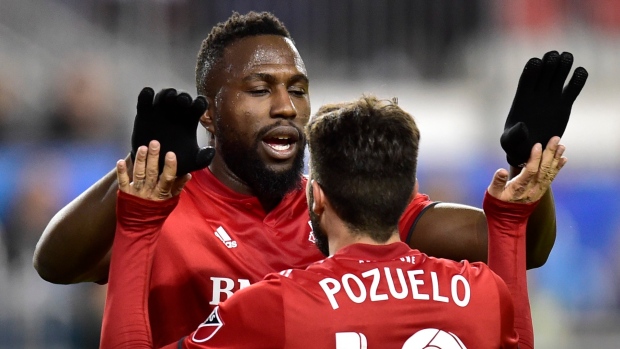 Toronto FC rode a 13-game unbeaten streak last season from the thick of a playoff race in the MLS Eastern Conference, right into an MLS Cup meeting with the Seattle Sounders.

While they were ultimately unsuccessful in their third trip to the Major League Soccer championship game, the streak re-established TFC as one of the top teams in the league one year after missing the postseason while defending the franchise’s first title.

TSN soccer analyst Kristian Jack says Toronto FC is a team – from the organization to the fans – that sees itself perpetually as one of MLS’ marquee clubs.

“Expectations from outside and expectations from within for TFC should always be the same. I think what they are is consistent – Toronto FC is a team that believes they should be competing for trophies every single year,” said Jack. “Three MLS Cup finals and a CONCACAF Champions League final in the last four years speak to that and I think in 2020 they believe, coming off a very successful playoff and an unbeaten run of 10 games in the regular season to end 2019, that they believe they can contend and win MLS Cup and potentially the Supporters’ Shield as well.”

For Toronto FC to get off to a good start to the 2020 campaign and attempt to reach those same heights this season, they’ll have to do it without captain and midfield stalwart Michael Bradley, who re-signed with the team in the off-season. Bradley underwent ankle surgery in January and is expected to miss the first four months of the season.

One of the players being touted to step into the role while Bradley recovers is Canadian midfielder Liam Fraser. The 22-year-old made nine appearances, all starts, for Toronto FC last season and TSN soccer analyst Steven Caldwell says it’s time for him to make the most of the playing time and responsibility that will fall to him with the captain on the sideline.

“It’s an enormous opportunity for Liam Fraser. It’s the chance that he’s been waiting for. He’s wanted to play regular football for TFC. It’s been difficult with a guy like Michael Bradley ahead of you, the captain of the club,” said Caldwell.

“Now, through Bradley’s unfortunate injury, it’s a chance for Liam Fraser to prove that he’s capable of doing that job. I definitely think he is. He has lots of ability, lots of talent and I think TFC are going to get a player that is capable of possessing the football, playing forward passes and the key for his game is to develop that positional side – to be in the right place at the right time defensively to do a job there as well. I think the sky is the limit for this young Canadian.”

Toronto FC used Targeted Allocation Money to re-sign Bradley, opening up one of their Designated Player positions. They filled that spot by signing Pablo Piatti from Espanyol in February, a player who arrives after scoring 14 goals and adding 19 assists in 95 appearances in all competitions for the La Liga side.

Unfortunately, Toronto FC and its fans will have to wait to see their new DP on the field as the 30-year-old will be out for a few weeks with a strained hamstring.

He is also coming off ACL surgery last February that limited him to seven games last season, but Jack says if the Argentine can regain his form, he will be a spectacular addition for Toronto FC.

“I think if Pablo Piatti can be the man that we saw in La Liga 18-24 months ago, then the ambitions of Toronto FC should go through the roof. He can be that good,” said Jack. “Piatti is the kind of player that can really create a lot. He’s fast, he’s quick and he’s good with the left foot in the wide areas and I think Toronto FC, when they get him on the field, if he can stay healthy, his connection with Jozy Altidore and Alejandro Pozuelo could be one of the best trios in MLS.”