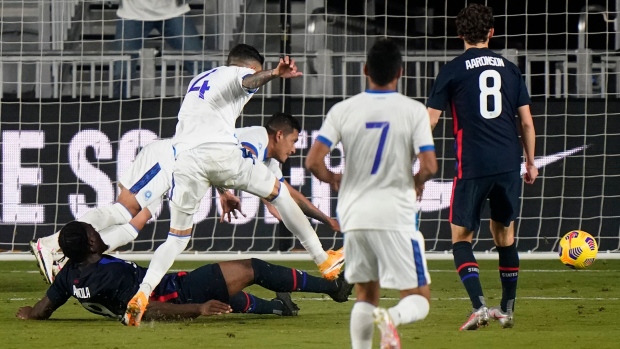 Toronto FC has signed forward Ayo Akinola to a new contract that runs through 2024 with an option for 2025.

Akinola's deal is part of the Major League Soccer U-22 Initiative which allows clubs to sign up to three young players, age 22 and younger, to "lucrative contracts at a reduced budget charge."

Players can occupy the U22 Initiative slot through the season they turn 25. The 22-year-old Akinola is eligible as a homegrown player on his second contract.

“Over the last few years, watching Ayo grow as a player and a person has been extremely gratifying to the many staff who have worked with him along our player pathway," Toronto president Bill Manning said in a statement. "We have seen glimpses the last two seasons of just how impactful Ayo can be and it’s exciting to think of what’s still to come for him as a TFC player.”

Akinola had surgery on his right knee in early August after injuring the anterior cruciate ligament of his knee in Canada's 1-0 loss to the U.S. at the CONCACAF Gold Cup. That restricted him to just 11 regular-season appearances with three goals.

Akinola's breakthrough year was in the pandemic-truncated 2020 season when he scored a team-high nine goals in 15 games. He turned heads with five goals in two games at the MLS is Back Tournament that July..

“Ayo has great starting points for a young attacker,” said Bob Bradley, Toronto's head coach and sporting director. “He moves well and puts himself in position to score goals. He has the ability to finish in a number of different ways. We are excited to continue working with him and pushing him to become even better.”

Akinola, who joined TFC as a homegrown player in December 2017, has made a combined 46 appearances across all competitions with 14 goals.

He spent two seasons with Toronto FC II, with eight goals in 34 appearances.

“Nothing makes me happier than knowing that I’ll be able to play in front of my family, friends and TFC fans at BMO Field. My goal is to recover from this injury, get back on the field and help our team win games and compete for titles,” said Akinola.

Born in Detroit, Akinola moved to Canada when he was one.

He represented the U.S. at youth level from 2015 to 2019 and made one appearance with senior team before switching allegiance to Canada. He scored in his lone appearance for the U.S., a 6-0 win over El Salvador, but was not cap-tied since the match was a friendly.

He made his Canadian debut against Haiti at last year's Gold Cup.