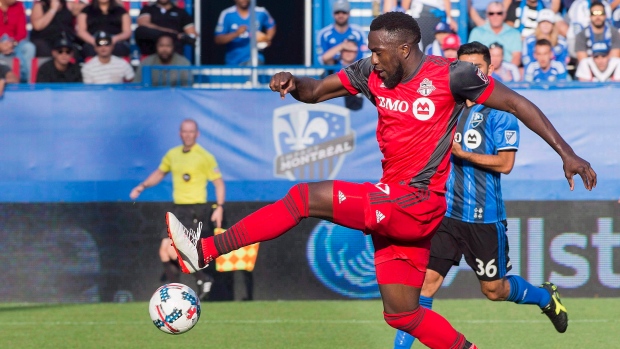 Toronto FC striker Jozy Altidore was not on the field for practice Thursday, two days before the team's playoff game against DC United, according to Joshua Kloke of The Athletic.

Jozy Altidore not on the field for the start of #TFCLive training today.

Team president Bill Manning said Thursday he believes the club will make a decision on the status of the striker on Saturday as he continues to rehab a leg injury.

"A little bit of a thigh strain. He was running yesterday. You're cautious, right? You want to make sure that if he can go, he can go. He's chomping at the bit, but we'll see," Manning told First Up on TSN Radio 1050 Toronto. "I think it's going to be a game-day decision. He actually went for an MRI later yesterday just to double check on things."

Manning's comments came one day after manager Greg Vanney admitted Altidore wouldn’t be 100 per cent by Saturday's game, but added that he was hopeful the striker would dress.

"He's doing well. He's taken good steps. Hopefully he'll be out doing more stuff out on the field tomorrow [Thursday], but we got him running, we got up him back up to speed," Vanney told TSN's Kristian Jack. "It's day-to-day, really is where we are at right now. Hopefully he'll be available for something."

Just spoke to Greg Vanney for an update on Jozy Altidore. Confirms he is taking good steps, continues to be considered day to day. Hoping he will be available for something but says he is not going to be 100% by Saturday. #TFCLive

Vanney added that Toronto will be prepared if Altidore is unable to play.

"It's a big game and if we can get him there and he's feeling good in terms of no pain and functionally we are all in the right place, we'll have him available for something," explained Vanney. "But if we're not quite there yet then we won't. At this time of year you have all scenarios in mind and you're setting yourself up for anything."

Altidore told Jack on Wednesday that he has not been able to get back onto the training field since going down with the injury, but says he's "getting better and better" and is still hopeful he'll be ready for Saturday.

"I feel pretty good. I've told the staff I feel good so they know where my head's at and I'm ready if needed," explained Altidore.

The 29-year-old was forced to miss Tuesday's United States men's national team loss against Canada due to the injury.

The winner of the DC United vs. TFC match will meet New York City FC, the top team in the East, on Oct. 23 at Yankee Stadium.