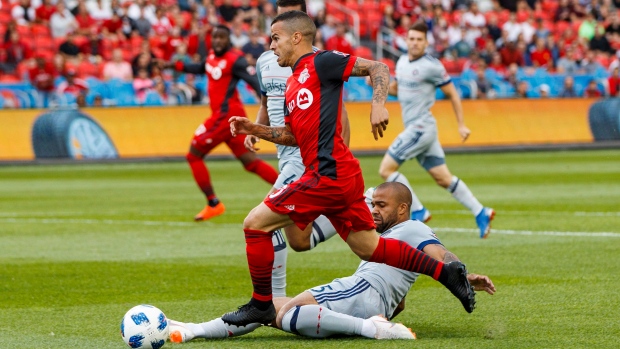 TORONTO — Former MLS MVP Sebastian Giovinco is back with Toronto FC, training with the team without a contract at present.

The Italian star, who turned 35 on Wednesday, left the MLS club in January 2019 when Toronto, unwilling to meet his contract demands, sold him to Saudi Arabia's Al-Hilal FC.

Giovinco, who maintained a residence in Toronto, left the Saudi club last August by mutual agreement and has made no secret of his desire to rejoin TFC.

But the fact he is with the team in camp does not mean he will be back in red this season.

The former Juventus forward would have to go through the league's allocation process, which regulates the return of former MLS players, among others, to the league. Toronto currently stands third on the allocation list, behind Inter Miami and FC Cincinnati.

And before Toronto sorts that out, it would have to determine if the player known as the Atomic Ant was worth bringing back -- and at a price it could afford.

News of Giovinco being back surfaced Thursday when the club, which arrived in California on Jan. 18 for training camp, finally released its camp roster.

In four seasons with Toronto, Giovinco had 68 goals and 52 assists in 114 regular-season games (111 starts).

With question-marks over the future of designated players Jozy Altidore and Yeferson Soteldo, who are both not in camp, and Italian star Lorenzo Insigne not coming to the club until July, TFC is short on attacking options.