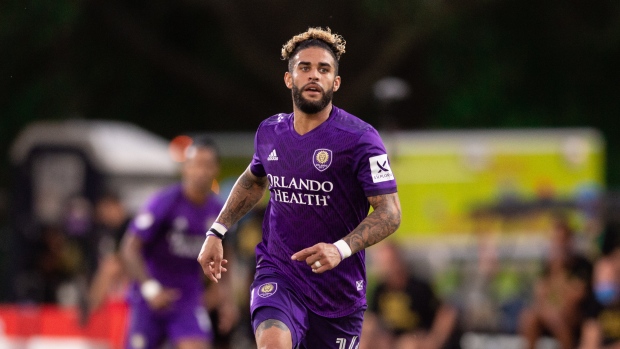 The 30-year-old Dwyer, who entered MLS in 2013, has 83 career regular-season and playoff goals in 204 games with Sporting Kansas City and Orlando City SC. He has been training with TFC since the pre-season.

“Dom is a powerful attacking player that has experience scoring goals in this league. He’s been training with us in Orlando, and he’s fit very well within the group,” Toronto FC GM Ali Curtis said in a statement. “Adding Dom gives us another dangerous attacking option when we think about our front six.

"Dom very much wanted to join the club and that was a big part of the signing process, given he had interest from other clubs. We’re happy he’s with us, and we’re looking forward to him getting on the field.”

Heading in the other direction were midfielder Liam Fraser (loaned to Columbus) and midfielder/wingback Griffin Dorsey (waived).

Toronto has been short up front in recent weeks with star striker Jozy Altidore dealing with illness and injury, Ayo Akinola coming back from injury and sophomore Ifunanyachi Achara still recovering from knee surgery.

Spanish playmaker Alejandro Pozuelo, who can also play forward, is still dealing with a quad issue.

Dwyer was most recently with Orlando in his second go-round with the Florida team. He made just two appearances last season before being sidelined by a knee injury.

In addition to a history of scoring goals, the five-foot-nine 181-pounder can be a major irritant to defenders with an abrasive edge to him.

Toronto has set up shop in Orlando during the pandemic due to border restrictions.

Born and raised in England, Dwyer was taken 16th overall in the 2012 MLS SuperDraft by Kansas City out of the University of South Florida. He made his MLS debut on Sept. 2, 2012, against Toronto .

Dwyer gained American citizenship in 2017 and went on to earn four caps for the U.S.

With Kansas City, Dwyer made a combined 150 appearances and scored 66 goals in all competitions.

Dwyer is married to Orlando Pride forward Sydney Leroux, a U.S. international who was born in B.C., to an American father and Canadian mother.

The 22-year-old midfielder/wingback saw just seven minutes of playing time in two substitute appearances since being drafted sixth overall in the 2019 MLS SuperDraft from Indiana, where the Colorado native was a second-team All-American.

The former U.S. under-20 international signed a Generation Adidas contract with MLS prior to the draft.

Curtis said the acquisitions of Soteldo and Lawrence had forced Dorsey farther down the depth chart.

"You have to make (roster) room at times," said coach Chris Armas. "So that's what that's about. We think he's a really good young professional. So this was not an easy decision."

"In my time as a pro, I’ve seen few young players work harder every day. Good luck in your next club, pal." he said in a social media post. "Success is around the corner."

This report by The Canadian Press was first published May 11, 2021