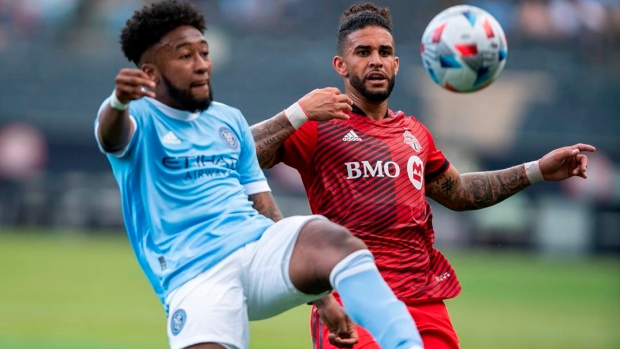 The Dom Dwyer era with Toronto FC is at its end.

The Reds are have traded the forward, along with the No. 3 pick in the 2022 SuperDraft, to FC Dallas in exchange for $50,000 in general allocation money.

NEWS | Toronto FC announced today that the club has acquired $50,000 in 2022 General Allocation Money (GAM) from @FCDallas in exchange for forward Dom Dwyer and the natural first-round pick (3rd overall) in the 2022 MLS SuperDraft.#TFCLive

MLS reporter Tom Bogert reports the Hoops are expected to buy out Dwyer, making the 31-year-old former United States international a free agent. The trade allows for TFC to avoid buying Dwyer out themselves.

Hearing that FC Dallas are acquiring the No. 3 MLS SuperDraft pick from Toronto FC as well as forward Dom Dwyer, and Dallas are buying out Dwyer.

So, Toronto gets out of Dwyer's contract, Dwyer becomes a free agent and Dallas get the No. 3 SuperDraft pick for their troubles.

Born in West Sussex, England, Dwyer signed a two-year deal with TFC last spring. He made 15 league appearances in 2021 without scoring a goal.

Prior to joining the Reds, Dwyer spent a decade in MLS with Sporting Kansas City and Orlando City, winning the MLS Cup in 2013 with KC.

Internationally, Dwyer was capped four times by the USMNT in 2017, scoring twice. He became eligible to play for the US after becoming a citizen in 2017.

The MLS SuperDraft is set for Tuesday. Expansion side Charlotte FC has the first selection.