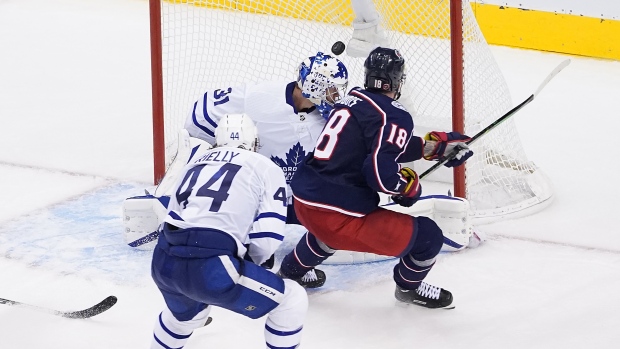 TORONTO — Just like that, it’s win-or-go-home for the Maple Leafs.

Toronto blew a three-goal lead in the third period against Columbus in Game 3 of their best-of-five qualifying-round series on Thursday, and were put firmly on the ropes when Pierre-Luc Dubois finished off a hat trick in overtime to lift Columbus over the Leafs, 4-3.

The Leafs trail the series 2-1, and now face elimination from the qualifiers in Friday night’s Game 4.

Toronto entered Game 3 in a deficit already on their backend, left by injured top-pairing forward Jake Muzzin. The veteran was stretchered off the ice during the final minutes of Game 2 following a collision with Oliver Bjorkstrand and will miss the rest of this series.

Martin Marincin drew in to replace Muzzin on Toronto’s blueline and Travis Dermott moved up to take Muzzin’s spot next to Justin Holl, but the team’s shutdown defender was still missed, especially in the frantic third period when Columbus turned up the heat on its opponent.

After jumping out to a 3-0 lead by midway through the second period, off goals from Cody Ceci, William Nylander and Nick Robertson, the Leafs started to relax, and the Blue Jackets pounced with Dubois’ first goal of the night to make it 3-1 Toronto going into the final frame.

“When they got that goal, it just seemed to give them some life,” said John Tavares. “And we just didn't do a lot of the things we did consistently previously in Game 2, especially just wearing them out in their zone. It is what it is; we have to push forward now and understand what's in front of us and regroup.”

The Leafs came out flat-footed again to start the third, and Columbus capitalized with a quick goal from Seth Jones. And then a bad pinch by Dermott led to Dubois getting loose, and tying Game 3 at 3-3 to force overtime.

Toronto had its chances early in the extra frame, and Frederik Andersen did his best to hold Columbus off in a 39-save performance. But a broken play in the Leafs’ end with just over 90 seconds left in the first overtime turned into a golden opportunity for Columbus, and Dubois made no mistake to give his club the win.

“I thought that as a team, we didn't help our defence as a group,” said Keefe. “And as a group our defence didn't help themselves. We're going to learn a great deal [about ourselves]. But I think we've been through adventures like this with this team before. We always come back with a better performance.”

There won’t be much time to dwell on what’s transpired for the Leafs, with puck drop on Game 4 scheduled for about 20 hours after Thursday’s overtime ended. And it’s clear to Toronto what needs to change before then.

“We really let those guys have their way on rushes,” said Mitch Marner. “Too many 3-on-3s, 2-on-2s. Freddie [Andersen] came up big for us many times. I think as forwards and D, we've got to talk more, cover each other better and stay above [our guys]. That's what that team does, they kill you on your turnovers, and they didn't miss on their opportunities when they had them.”

Despite Keefe not liking what the Leafs presented early on, at least his club was on the right side of the scoresheet in the first two periods.

Ceci got scoring started on the Leafs’ previously dormant special teams, ripping a point blast through traffic while shorthanded that deflected off Jones and beat Joonas Korpisalo.

That was the first special teams goal of any kind in the series. Both clubs came into Thursday’s game 0-for-6 on the power play.

By the second period, Toronto’s power play was clicking at last, courtesy of Nylander’s quick hands in front of Korpisalo. With assists to Marner and Auston Matthews, that was Nylander’s fourth goal in 23 career postseason games.

Robertson’s goal later in the frame was his first ever in the NHL, putting Toronto up by three and forcing Blue Jackets coach John Tortorella to replace Korpisalo (12-for-15 on the night) with Elvis Merzlikins.

Just 18 years old, Robertson made his NHL debut in Game 1 of this series and on Thursday became the third player in Leafs’ history to score a playoff goal before his 19th birthday, joining Jack Hamilton and Ted Kennedy on the exclusive list.

He’s also the first 18-year-old to score in an NHL playoff game since Calgary’s Sam Bennett in 2015.

But whatever excitement Robertson felt in the moment, it had all but vanished by game’s end. The only message in Toronto’s room was of urgency about the task ahead, and how quickly their hopes of a long postseason run could be dashed.

“We weren't playing with any real plan or purpose, so it caught up with us,” Keefe reiterated. “It’s over and we've got to regroup here. This is what playoff hockey is all about, the emotion as it swings, the momentum. It's the best part of playoffs here, so it's a chance to regroup and come back at it tomorrow [Friday] and be a better version of ourselves than we were today. It's an exciting part for me.”