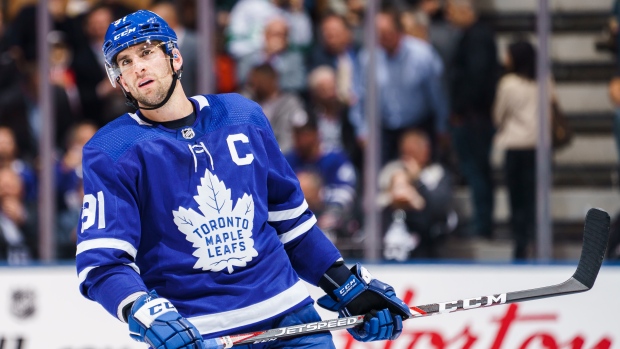 Toronto Maple Leafs captain John Tavares will miss a minimum of two weeks after suffering a broken finger late in Wednesday's 4-3 loss to the Washington Capitals.

The team said Thursday Tavares, who scored with just under three minutes left in Wednesday's loss, will be reassessed  in two weeks. With the timeline, Tavares will miss at least the team's next six games.

He will be out of the lineup for a minimum of two weeks, at which point he will be reassessed by the team's medical staff.

The 29-year-old has three goals and seven points in eight games for the Maple Leafs this season and was in the midst of a four-game point streak. Tavares sits third among Maple Leafs forwards in ice time this season, averaging 18:10 of ice time, behind only Mitch Marner and Auston Matthews.

The centre scored a career-high 47 goals and posted 88 points while appearing in all 82 games last season, his first with the Maple Leafs after joining the team on a seven-year, $77 million contract.

Wednesday's loss dropped Toronto to 4-3-1 on the early season. Toronto will host the Boston Bruins on Saturday.

The Leafs who added centres Alex Kerfoot, Jason Spezza and Nic Shore to their roster this past off-season, are also currently without winger Zach Hyman and Travis Dermott due to injuries.