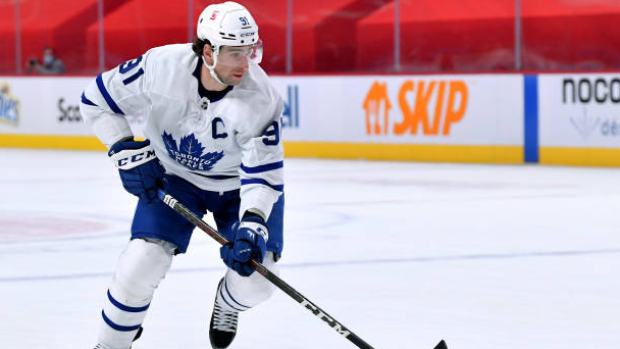 TORONTO — John Tavares is recovering well from his physical injuries. It’s the emotional wounds that will take longer to heal.

The Maple Leafs’ captain spoke to media on Wednesday for the first time since suffering a concussion and knee injury during Game 1 of Toronto’s first-round playoff series against Montreal on May 20.

Wednesday was also locker clean-out day for the Leafs after getting bounced by the Canadiens in Monday’s Game 7.

Tavares was happy to report he's made good progress health-wise lately. What remains most painful is the fact Toronto’s season came to another disastrous halt in a third first-round exit in four seasons, something Tavares wasn’t able to help his team avoid.

“It's really hard to put into context the disappointment, just the devastation of what this loss brings to the group and the challenges we have ahead of us,” Tavares said.

“It's been a tough go. We all take significant responsibility for not meeting expectations. We had strong belief and wanted to accomplish something special and get over the hurdles and challenges that we have faced, not just this season but over previous seasons. We feel like we've let our fan base down.”

That wasn’t the story Tavares thought the Leafs were writing this year. But so much changed midway through that first period in Game 1, when a pair of violent collisions sent Tavares to hospital and out of the series.

The 30-year-old said he doesn’t remember the initial hit he took from Ben Chiarot, or the knee to the head from Corey Perry that knocked him nearly unconscious to the ice.

It wasn’t until Tavares was being stretchered off and placed into a waiting ambulance that he began to grasp what was happening.

Despite the scary scene, Tavares was back skating just one week later. Even now though, Tavares can’t bring himself to watch the hit to his head. The reaction others had to it was telling enough.

“I know how traumatic it was for my family, especially how many times they saw it and the attention that was on it,” he said. “When I was talking to them at the hospital that night, and even talking to people in the organization, just the looks on their faces made me realize it was pretty significant.

“And maybe I will watch it…but there’s not too many people that have recommended I take a look at it yet. It will be continued part of my recovery process, not just my physical health but from a psychological standpoint.”

Tavares acknowledged that Perry contacted him after Game 1, expressing his concern and offering apologies. While Tavares appreciated the sentiment, he also believes the intensity of playoffs impacted how Perry played that night.

“From everyone I've talked to, there's no sense of any intent or trying to be dirty or hurt me,” Tavares said. “In saying that, I do think when it's the opening game of the playoffs and there's a lot of energy and they wanted to establish a physical game, you certainly go more so out of your way than maybe in the regular season [to do that]. But Corey did reach out to me with a nice message and I'd like to think that there was no intent.”

Tavares hoped that if the Leafs advanced he would have been healthy enough to join them at some point. When Toronto took a 3-1 series lead over Montreal, all signs pointed to the Leafs reaching the second round for the first time since 2004.

Then came Toronto’s overtime loss in Game 5, followed by another overtime defeat in Game 6. In both outings, the Leafs had to overcome multi-goal deficits just to reach extra time.

The final nail in Toronto’s coffin was a lacklustre performance in Game 7, where a third consecutive poor start set the Leafs up for more failure.

“We wanted to get the job done and guys are competing and doing everything they can,” said Tavares. “Not getting off on the right foot in any of those three games really put us in a position that built their confidence to [establish] their game more so than us dictating the way we want the games to be played.

“Guys battled back in Games 5 and 6 and we gave ourselves a great chance being one shot away from finishing the series off [and we didn't]. We’ll continue trying to figure out what we’ve got to do to break through and get over the hump.”

For all the frustration Tavares is feeling, there is an immense gratitude for that fact that his injury situation could have been much worse.

“I feel very fortunate, considering what I went through and the traumatic nature of the injury,” said Tavares. “I’m really happy and thankful to be where I'm at today and make the progress that I have to this point. I'll continue to get back to 100 per cent health and get myself ready to play and compete as soon as possible.”