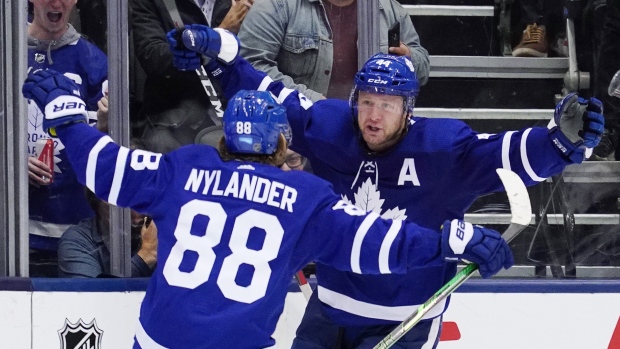 TORONTO – Morgan Rielly hasn’t missed a shift yet for the Maple Leafs this season, but that durability has come at a cost.

Toronto’s leader in ice time has been battling an undisclosed injury for the last 10 days that kept him from practising to preserve his availability for games, including Tuesday’s tilt against Washington.

“People get things that happen over the course of time,” Rielly said after taking part in the Leafs’ optional morning skate. “It's been a tough schedule, but that being said, you got to do what you got to do to be able to play. So if you have to miss a couple practices, it’s not a big deal.”

That’s not to say that sitting out is easy for Rielly. He admitted he likes to practise and has pleaded with head coach Mike Babcock to get back at it. But with Rielly carrying the heaviest workload for Toronto each night at 24:46, ranking 10th overall in the NHL for average ice time per game, Babcock is keeping his defenceman in check.

“He talked to me this morning; he said, ‘Babs, you know I want to practise.’ I know,” Babcock said. “He’s all-in every day. He’s an unbelievable player and he’s an unbelievable, passionate leader. And so it’s important for us that he’s feeling great and playing great. Right now he's not feeling as great, but he’s still giving ‘er everything he's got. That’s all we ask.”

The injury first became apparent when Rielly missed practice on Oct. 20, and he’s missed two more sessions since. Toronto has played four games over that span, and Rielly’s produced a goal and an assist and is a plus-one, adding to his totals through 13 games of 13 points (three goals, 10 assists) and a plus-three. The blueliner certainly didn’t look like he was hampered by much when scoring the game-winning goal for Toronto in Friday’s 4-1 win over San Jose.

But injury aside, this early season has had its share of ups and downs for Rielly. After spending the last two seasons alongside Ron Hainsey, he’s still working to establish chemistry with new defence partner Cody Ceci.

Meanwhile, the Leafs' top power-play unit, which Rielly plays the point on, has struggled to score lately, going 1-for-13 in the Leafs’ last six games.

On top of everything, Rielly been saddled with the most playing time of his career. While balancing it all isn’t easy, it’s a challenge he wants.

“Things change for everyone over the course of time; you want more responsibilities,” Rielly said. “Ask around the room, everyone wants to be out there as much as you can. So you get ready, you prepare; you do what you have to do to feel good and to play.”

Mitch Marner can often be counted upon to keep things light in the Leafs room, joking on Tuesday that Rielly was simply taking a page from former teammate Tyler Bozak’s book on repeatedly skipping practice with a mystery ailment.

“It's kind of funny, he’s kind of pulling the Bozie from like two years ago, when Bozie was on that program,” Marner laughed. “But no, he’s a big part of this team and means a lot. You know he wants to be out there with us. He wants to be battling and he makes our team better.”

Rielly let it be known that “Bozie was faking it” when asked about mirroring his practice tendencies, but he would rather focus move to how Toronto can improve as a five-man defensive unit.

Toronto has allowed the fourth-most goals against this season (44), while averaging the ninth-most shots against (32.8). Getting Travis Dermott back from a shoulder injury for his season debut on Tuesday should help the Leafs’ cause on the blueline, but there’s a need for every skater to step up his game.

“It's always a work in progress,” Rielly said of the Leafs’ team defence. “It's an area of the game as a team that we take seriously and we want to improve on. I'm in the same boat. Tyson [Barrie] is in the same boat, Ceci is the same boat. So we all want to get better, improve and help this team win. A part of that is going to be playing good team defence, so individuals have to step up and be better.”

The Leafs will have to be significantly better on Tuesday than they were two weeks ago against Washington. Playing on the road and in the second half of a back-to-back, Toronto jumped out to a 2-0 lead and then allowed four unanswered goals, eventually falling 4-3.

Toronto captain John Tavares also suffered a finger injury in the loss that is keeping him out, and the Leafs have posted a middling 2-2-1 record since. This time around, Rielly said the Leafs are well-prepared for the Capitals attack and ready to get back in the win column after Saturday’s loss to Montreal.

“We're playing a good team tonight with a high-powered offence, a great power play, and we played them already so we know what to expect,” Rielly said. “[That team defence] is big, it’s an area of the game that we have to get better at, we want to get better at, and are focusing on. I would expect it to improve, and it's up to the players in here to commit to it and just go out there and do it.”