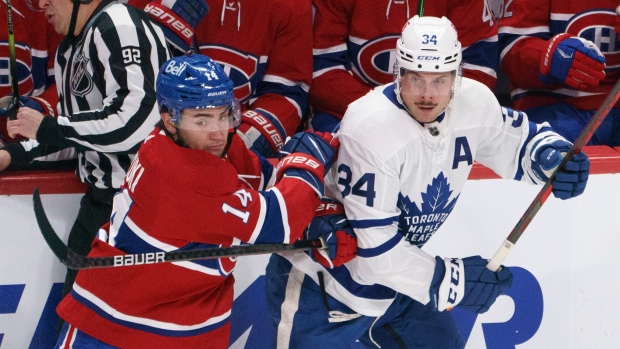 TORONTO — Auston Matthews has courted headlines with his gaudy offensive numbers to open this season, but the Toronto Maple Leafs’ star has quietly evolved in other directions too, by becoming one of the team’s more powerful forwards.

“I think I've made it a point in my game to be more physical,” Matthews told reporters on a Zoom call Saturday, ahead of facing the Montreal Canadiens. “I don't think it's really over the top, but when I have opportunities to use my size and strength, whether it's with the puck or without the puck, I’ll just try to utilize that to my advantage.”

So far, that strategy's been working. Through 13 games this season, Matthews has been credited with the second-most hits among Leafs’ forwards at 20, for a hits/60 of 4.20.

By comparison, Matthews turned in a 1.18 hits/60 over the first four years of his career.

It would be easy for Matthews to simply hang his hat on offensive talent, seeing as he leads the NHL in goals with 11 and has 16 points already on the year, but that success isn’t all that drives the centre. His long-stated ambition is to be as well-rounded a player as possible, and it didn’t take an order from the coaching staff for Matthews to see where he could improve.

So the 23-year-old started the work himself, and began upping his physicality during Toronto’s qualifying-round playoff series last summer against Columbus.

"I don't think [anyone] really came to me and made requests or anything,” he said. “I just thought in my head when we went back into the [playoff] bubble, I was definitely a lot more physical and I think it just worked to my advantage. It wasn't over the top or anything, I'm not out there searching for big hits, it's just here and there. And if I have an opportunity to finish a check or be physical on a puck, I think I'm doing that.”

Matthews sees that as a benefit to both him individually and for the Leafs, because, “all that stuff wears on defencemen and forwards throughout the game and throughout the season and throughout a playoff series, which is what we're ultimately working towards.”

There is also plenty of physicality directed towards Matthews on the ice, including some net-front cross-checks early in the season that sparked heated debate over whether more protection on the league’s top players is needed. But that’s not a topic Matthews wants to wade far into.

“It's a physical sport,” Matthews shrugged. “You have the right to compete out there and defend your net and finish checks and be physical so I haven't really noticed [more hits targeted against me] but it's hockey, it's a fast game out there so lots of stuff happens and I just try to go with the flow and just play my game.”

That’s what the Leafs have come to expect from Matthews, and he’s played a huge part in their 11-2-1 start to the season. For all of the growth he’s shown on the ice though, Matthews has been maturing equally within Toronto’s dressing room. By all accounts, the second-year alternate captain has become more vocal with teammates and isn’t afraid to speak up when it’s necessary.

“It's just a matter of him growing as a player and as a man really,” said head coach Sheldon Keefe of Matthews’ leadership. “He feels a lot more comfortable in the league and amongst [the Leafs]. I think he also has a great level of confidence that he's taken care of his end of things on the ice, not just on the offensive side of it but all the other areas and when you do that, it gives you a lot more confidence to be able to speak and push your teammates and challenge them and all those kind of things. Auston and I have had those discussions about him taking those steps throughout the offseason and we've seen that.”

“Matts is a great leader,” added Travis Dermott. “As a young guy you're obviously more focused on yourself and you're not going to be the most outspoken guy right off the bat, so I think he's coming into those shoes and all the boys love him so it's a voice we definitely respect around the room and when he does speak up now it's someone you're obviously listening to.”

The Leafs intend to let their play do the talking on Saturday though, when they go for a second straight win over the Canadiens. Toronto just topped Montreal on the road Wednesday 3-1, in a performance Keefe declared to have had the fewest scoring chances given up by his team all season.

If they can follow that blueprint again, the Leafs could by game’s end hold a seven-point cushion over the Canadiens at first place in the North Division. And Matthews knows exactly what it will take to earn another victory.

“They really feed off transition and they got a lot of speed and a lot of skill on that team,” he explained. “So when you feed their transition, they're coming back at you and if the D don't have good gaps, it makes it difficult on the whole five-man unit itself. I think we did a good job [on Wednesday] of taking care of the puck and when we can make plays in the neutral zone or at their blue line we're making them and when there was nothing there we just got the puck deep and try to grind down low.”