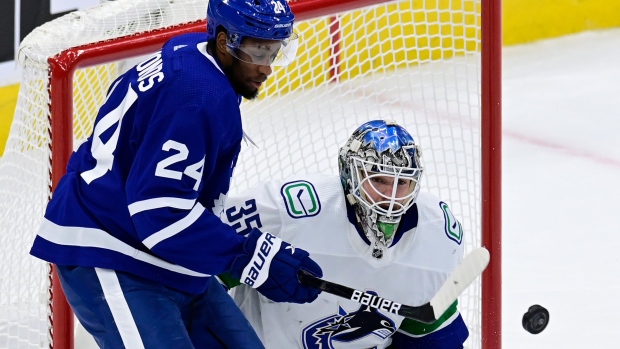 The veteran winger was injured in Saturday's 5-1 win over the Vancouver Canucks after appearing to take a puck to the hand.

Injured forward Joe Thornton took reps in Simmonds' spot on the second line during Monday's gameday skate but is not yet eligible to return to game action. Keefe said Thornton, who suffered a fractured rib last month, will be out at least another week.

"Simmer is a big loss for us. We do think there is progress here for both Thornton and (Nick) Robertson," Keefe said. "In Jumbo's case in particular, we know that he brings a lot to us and he'll help insulate some of that loss. He's similar in terms of personality and experience on our bench."

Simmonds was off to a great start this season playing for his hometown Leafs, with five goals through his first 12 games. He had also racked up a team-high 22 penalty minutes.

"Wayne has been awesome," centre Alex Kerfoot said Monday. "He's a lot of fun to be around in the locker room, he's got a lot of experience. Plays hard every day, comes to the rink and is consistent. We're going to miss him out there."

The Leafs will be back in action Monday night against those same Canucks.