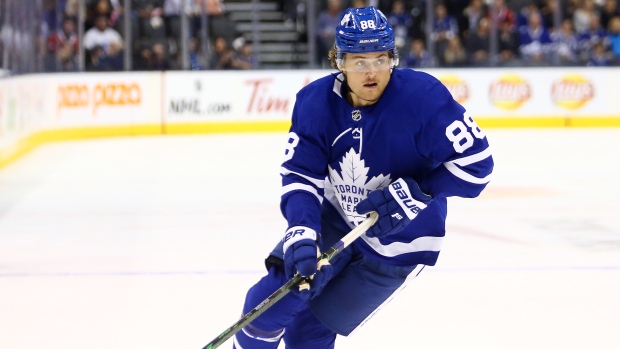 TSN Toronto reporter Mark Masters checks in daily with news and notes on the Maple Leafs, who held an optional skate this morning and the Boston Bruins skated ahead of tonight's game.

After starting the season with a five-game point streak (two goals, three assists), William Nylander has failed to hit the scoresheet in three straight games.

"I feel like there's been chances there to score so not too worried about that," the 23-year-old said. "As long as the chances are there you're happy."

Nylander had 12 scoring chances in the last two games (vs. Minnesota, at Washington) after posting seven in his first seven games of the season, per NaturalStatTrick.

"I think Willy would tell you that he's feeling way better than he was at this time last year," noted coach Mike Babcock. "I think he was on some beach in Sweden or something last year at this time so just being at the rink is a real step in the right direction, I'd say."

And Nylander is getting a power-play promotion tonight moving from the right flank on the second unit to the middle of the top unit taking over the bumper spot previously occupied by the injured John Tavares.

"It's a little different from where I've been playing," Nylander said, "but I liked it yesterday at practice, felt pretty good, so we'll see how it goes. You just got to support the guy with the puck all the time and be close and then get downhill when the shot’s taken."

Nylander previously played the bumper role at the World Championship with Team Sweden.

"There's way more space and it's a different kind of program on that size of rink," Babcock pointed out. "That guy has got to be there to break down all the pressure all the time. You've got to be dialled in, really competitive, heavy stick, so there's a challenge for him there."

Nylander should be amped up to face his good friend David Pastrnak. The former Swedish league linemates now share a number after Nylander switched from 29 to 88 this season.

"We were joking about it," Nylander said. "We actually did an interview and stuff in Sweden during the summer so it was fun."

Did Pastrnak give Nylander a hard time?

"Not really, actually," the Bruins winger said, noting Nylander wore No. 88 before him when they played together with Sodertalje. "To be honest, 29 wasn't really cool anyway so happy for him … So far, he's been pretty good and seems like the number is doing good for him."

With Tavares out, Babcock may look to match the Auston Matthews line against Boston's top line at times, but likely not for defensive-zone starts. Nylander believes his group, which also includes left winger Andreas Johnsson, is ready for the challenge having made progress in their own end this season.

"We're getting better and better every game," he said. "We've been doing a pretty good job sorting things out in the D-zone."

But slowing down Boston’s top line has proven near impossible. Pastrnak has scored in five straight games.

"I would say it's kind of (in) the zone," the Czech native said of his mindset, "you're feeling good so you don't want to pass on any opportunity that you get."

Pastrnak's one-timer is quickly emerging as among the most feared in the game.

"Earlier in his career he wasn't getting the same looks," observed centre Patrice Bergeron, who has seven points in seven games. "I think he developed getting open and finding ways to find that lane for us to give it to him and right now he's pretty lethal that way. He's always had that shot, but right now it's more about his positioning and how he gets open for us."

The Leafs have to find a way to eliminate those lanes tonight especially on the penalty kill. All three of the goals the Bruins scored on Thursday against Tampa Bay came on the man advantage. Boston scored seven power-play goals on 16 attempts in last year’s playoff series against Toronto.

"They're set up for one-timers," noted defenceman Cody Ceci, who leads the Leafs in shorthanded ice time (3:29 per game). "They're always looking to seam pucks through so we got to be aware of that. It will be kind of similar to Washington's power play and going back-to-back on two good power plays is always tough, but we got to get the job done."

Four of the six Leafs defencemen dressing tonight did not play in the series against Boston last season. That’s made game planning a bit more challenging for the Bruins. They see that Toronto is allowing a lot of goals (3.38 per game, 21st overall), but also realize it’s early in the year.

"Defensively, we're always looking for where we can expose teams no matter who we play, (but) probably too early to tell," explained coach Bruce Cassidy when asked about the pre-scout. "I think it’s unfair, when you get new D partners like that, that's one area where chemistry is really important, I think more than up front. So, that part of it, let's judge them a little more down the road."

"Right now, like a lot of us, we're trying to get a little consistency in our games," the former Senator said.

"Mostly getting used to playing with each other, knowing where each other are on the ice and just trying to help each other out as much as possible," Ceci explained. "Other than that I think it's going good, I mean, we're moving the puck well. It's just figuring out little things here and there. I think we can clean it up moving forward."

"We spent a lot of time on nuances yesterday at practice," said Babcock, "he's still getting dialled into that … you've got to remember, lots of our things are new, especially on the back end."

Tyson Barrie is in the same boat. He's still getting used to new partner Jake Muzzin.

"I really love playing with him," the ex-Avalanche rearguard said. "As a team, we want a little bit more out of ourselves and I think, personally, I'd like a little more out of myself. I think it's coming and it takes a little bit to get chemistry going, but I feel really comfortable with Muzz and I think he’s been great."

Barrie is eager to see what the Leafs-Bruins rivalry is all about.

"It will be cool," he said. "I think tonight will be a lot of fun. Saturday night at home against Boston, that's as big as it gets here."

Are the Leafs facing psychological baggage against a team that has eliminated them the last two years?

"At playoff time there might be a little bit," Babcock said. "I think, during the regular season it's a regular season game. Not all games are, as an individual, perceived equal. Some games you're more excited for than others. Obviously, when you've played him two years in a row in the playoffs, you know a lot about them, they know a lot about you. You want to see where you're at. They want the same. We play them twice here in ... four days or whatever it is. And so, you know, it's a good opportunity for us."

So, what was the lesson from last season's heartbreaking loss?

"Game 7 is tight," said Johnsson, "so it’s small details, if you think about it too much you go crazy. So, I mean, if you can shutdown the first line you have won a lot."

The Bruins, who lost in Game 7 of the Cup final, are also eager to turn the page on last season and have opened the year 5-1-1. How'd they do it?

"Just like when you a read a book and you turn it," said Pastrnak with a smile while making the page-flip motion.

When pushed, he admits it's not that easy.

"Yeah, obviously, it stinks, you know, it's going to hurt forever."

One thing the Bruins have going for them is a veteran core that has been on both sides of the Game 7 championship series heartbreak.

"The page has been turned," said Bergeron. "We enjoy the game too much and we love playing for each other."

"To be right back down like the other teams and have to go right back up again where we were, that’s a great challenge in front of us. We're looking forward to it. There's going to be some ups and downs and that's what makes it fun and exciting again. It's the love of the game, I guess."

"They've been building their program for a long time," said Babcock. "[Zdeno] Chara has been there, Bergeron has been there, we'd like to steal those guys. We'd like to have a guy like Bergy who has won everywhere he's ever been, leading kind of the charge and the same on the back. I think those are important things to have. And, so, we've really tried to create a culture here over four years that's based around winning. We've gone from not winning at all to winning all the time and expecting to win."

Although the Bruins' record looks good, Cassidy is far from content with the start. Boston is relying way too much on Pastrnak,  Bergeron and Brad Marchand, who have combined to score 14 of Boston's 19 goals.

"I don't think we've played our best hockey by any stretch. Our record is probably a product of really good special teams, some timely scoring and really good goaltending," Cassidy said. "We’re not as tight as we typically are, we're giving up more than we typically do so we’ve got some areas we have to address."

An injury to David Krejci hasn't helped as the centre will miss a second straight game tonight.

Cassidy is hoping his team can improve it's structure to generate more offence.

"What we haven't got a lot is some easy transition plays and that's a product of our neutral-zone defence," he said. "We haven’t created as many turnovers so we haven't been as good there and as a result we haven't gone back the other way with numbers as much."