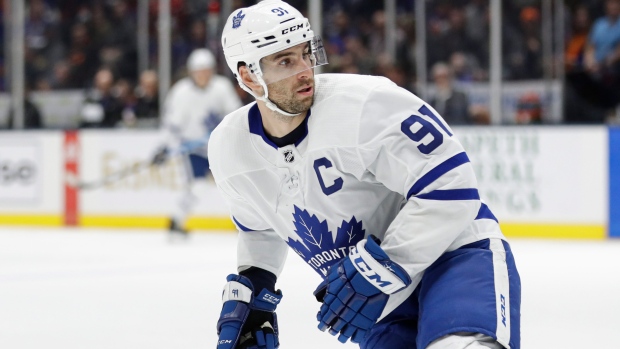 It's been a whole two days since Phase 2 of the NHL's Return to Play protocol got underway, and already players are adopting new routines for the new normal.

For instance, Maple Leafs captain John Tavares has quickly learned the benefits of putting in a little extra time on his own before heading to work.

“After the first day back, I actually brought my sticks home so I could tape them up and save time at the rink and get done everything I need to do there,” Tavares told reporters on a Zoom conference call Tuesday, following his second day of on-ice work.

“There's a pretty big-time crunch on being in the arena; you only have about 45 minutes to an hour to complete your workout and you’ve got about 40 minutes on the ice. The windows are fairly small, but the actual work we're able to get in is going to go a long way in helping us prepare and get ready. The intensity is there.”

The NHL’s Phase 2 regime is an entirely voluntary process, with guidelines stating players can convene in groups of no more than six players.

There’s still a long way to go before the league could potentially move into Phase 3, with prospective training camps starting July 10 at the earliest. If things progress to Phase 4, Toronto will face the Columbus Blue Jackets in a best-of-five qualifying round series for a spot in the NHL’s 16-team postseason field.

That gives other Leafs plenty of time to get involved in Phase 2 should they choose to. Tavares remains hopeful protocols will evolve to become less stringent as time goes on.

“It only makes sense that eventually the groups are going to expand here in Phase 2,” said Tavares, who’s been an active member of the NHL/NHLPA’s Return to Play Committee. “To go from [skating with] six guys and only seeing three or four staff members to possibly then seeing 40 people in a training camp doesn't really make a whole lot of sense. So hopefully in a couple of weeks we can take our next step, kind of in the same framework you're seeing with local authorities.”

Despite it being extremely early on in hockey’s return operation, Tavares and his teammates are approaching this as an opportunity to improve.

“We’re really trying to use this time to come together and push one another, and really get prepared so we feel really good about where we're at once Phase 3 rolls around,” Tavares said. “It isn’t about just getting the cobwebs out; we have to be smart and diligent with how we build ourselves from here on in. We have quite a few of our guys here in town who are getting on the same page, which is great. Everyone is taking this very seriously and I think have been very dialled in. We need to perform right off the bat [in a qualifying round], to get results that we need to continue to move on and have a chance to continue to play for the Stanley Cup.”

Unlike in a normal practice or regular training session, Phase 2 limits who players can interact with to help quell the spread of disease. So rather than being surrounded by coaches and development staff herding them through activities, it’s on each group to come up with a new plan of attack each day.

“On the ice we've been brainstorming amongst [ourselves], and then with some [outside] guidance from our development staff on the fundamentals, we just started skating, shooting, passing and stick handling,” Tavares said. “For our goalies, it’s important to see shots and just get some different variety, a lot of touches. You're trying to get the intensity up in the cardiovascular training component for your conditioning, especially with skating and those things you can't really mimic in the gym. And even with a lot of the restrictions and different protocols that are in place, it’s fantastic being at the rink.”

Tavares may not have hesitated to get back in action, but other NHLers have expressed concern over the NHL making a return at all.

Florida Panthers defenceman Anton Stralman spoke to The Athletic last week about risks associated with exposure to COVID-19 for players facing underlying health conditions, like those he deals with following a lengthy battle with the lung disease bronchiectasis.

Stralman told The Athletic that, “I think you should be concerned…I know everybody wants hockey back, but safety has to come first.”

As not only a Return to Play committee member but the Leafs captain, Tavares would be a natural choice for other Leafs to reach out to with health and safety questions. But given how extensive the NHL’s Phase 2 policies are, from mandating face masks be worn when personnel aren’t on the ice, to sanitizing measures, to bi-weekly COVID-19 testing, Tavares said he hasn’t heard of any issues from his teammates.

“[There’s nothing] I'm completely aware of,” Tavares said. “I think everyone wants to make sure they're healthy and safe. The detail and everything that we're going through, how diligent our medical staff has been, how available they've been…they’re making sure that anyone that has anything that might cause any complications at all [is taken care of]. We want to make sure everyone is safe, and can feel comfortable about the situation and they can just worry about being a hockey player. We never want to be in a situation where guys don't feel safe and can't just focus on playing hockey at its highest level.”

For all the hoops still left to jump through, having another chance to compete for hockey's highest honour is in part what would make returning to play worthwhile for Tavares.

It's the thought that drives him daily, and sustained him through months of self-isolation and at-home workouts. So that even with the challenging new protocols of Phase 2, and the reality of games without fans potentially looming, Tavares has never lost sight of why playing again truly matters.

“The biggest motivating factor is I've wanted to lift that [Stanley Cup] trophy over my head since I was a kid,” Tavares said. “I think [playing] would be a great sign for society and a great thing we can do for a lot of our communities and cities and our hockey fans…that can get behind something and be able to take their mind away. [As players], you love to play this game and love to compete and all that is the same, what happens in between the boards is all going to be the same. You’re just trying to put yourself in a good place mentally, be in the moment and understand there's still a lot to be play for.”