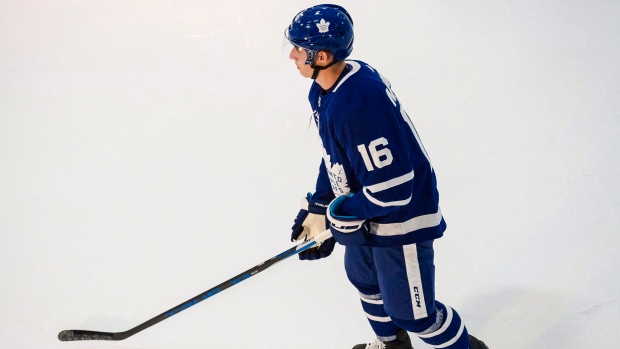 Dubas added that he would not comment on negotiations with Marner again until the situation "is resolved one way or another," noting he didn’t find providing updates on William Nylander’s contract negotiation productive last year.

He also acknowledged that using long-term injured reserve is a factor in wanting to have Marner signed by opening night.

To sum up Kyle Dubas’ comments on Mitch Marner: Important player. Great person. Want him here. Optimistic something gets done. In every negotiation, both sides probably feel the other is being unreasonable, but will be no hard feelings on #Leafs side in the end

TSN Hockey Insider Darren Dreger reported Wednesday that the Maple Leafs have been "persistent" in pushing both seven- and eight-year extension offers to Marner this summer. He added the Maple Leafs made an offer of $11 million per season in June, which included the $1.6 million Schedule B bonus Marner did not receive in his entry-level contract.

TSN Hockey Insider Bob McKenzie reported, however, that since the average annual value was lower than Auston Matthews' new contract on a longer term, the $11 million salary hasn't been palatable to Marner's camp. Matthews signed a five-year, $58.17 million contract with the Maple Leafs in February, which carries a cap hit of $11.634 million through the 2023-24 season.

Maple Leafs head coach Mike Babcock said Thursday that with Marner absent, Kasperi Kapanen is expected to join a line with John Tavares. He added that the team's plan is to have Kapanen on a line with Alexander Kerfoot once Marner is under contract.