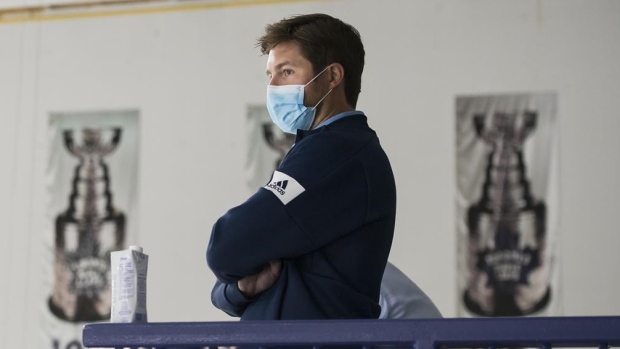 TORONTO - When Maple Leafs’ general manager Kyle Dubas was asked Tuesday if he’d be willing to part with a top prospect in order to improve his club before the NHL’s April 12 trade deadline, his response was immediate: “Yes.”

As it stands, any one of the Leafs’ most coveted young players (Nick Robertson, Rasmus Sandin, Timothy Liljegren and Rodion Amirov to name a few) could be trade bait, signalling that if Toronto believes an asset on the open market can help them win now, sacrifices will be made.

Dubas admitted that so far, “most of the [trade] conversations are focused on forwards” but he isn’t ruling anything out.

“We'll look at everything,” he said. “I don't go in transfixed on any one area in particular. Some [areas] on our team, like defence and goaltending, are a little bit more stable. In the summer we had to move out some forwards that were good forwards for us in order to add on the back end, and thus we feel like that's an area where we may want to look out a little bit more. But I'm not precluding anything at this point.”

Another factor influencing Dubas’ approach to the deadline is Canada's mandatory 14-day quarantine period, making expediency all the more pressing.

"We're going to be in a tougher spot to certainly get as much out of it as we can," Dubas said of a potential trade. "If you look at the schedule, April 12 is the deadline and then if you go to two weeks beyond that you're at April 27-28 before they get out of their hotel, and then they're only with the team for 10 days or something like that, so certainly it provides an incentive to try to make the moves earlier. But it takes two to make that happen though, so we'll see. But certainly for us, the sooner we can get a player in here through the quarantine and then integrate them into our program systems-wise and what we're about, the better for them and for us."

Then there's the NHL’s flat salary cap of $81.5 million. Toronto is up against that number already, and since it's not expected to inflate for at least the next couple of seasons, the Leafs must be mindful of both money and term attached to a potential acquisition.

“I think we would look at everything,” Dubas said. "Certainly knowing that the cap is going to stay the same here, it's a little bit more complex this year. Anything that we take from next year's allotment, it impacts a number of different things as you can well imagine. It's a rare time where probably a rental is a better fit. That said, if it's something that can we feel can improve our team long term, we'll find a way to make it work and figure it out, whether it's a pure hockey trade or having to do something else to offset it.”

Over the more than 30-minute availability, Dubas went on to discuss a number of other key topics, from the team’s goaltending to improving their depth as the season goes.

On if he feels vindicated by Leafs’ early success this season (40 points in 30 games, sitting in first place in the North Division)

“I wouldn't say vindicated. I put a lot of pressure on myself to continue to help with [president Brendan Shanahan] and with [head coach] Sheldon [Keefe] and with [assistant general managers] Brandon Pridham and Laurence [Gilman] and our group here, to continue to build it and get better. I don't think it's anywhere close to where we think we can be in time and that's sort of the part that drives us and drives me is that I think we've had really good stretches this year, but there have been times when I think that I haven't done a good enough job whatsoever in helping the team. Whether that's what drives me or what pushes me and the group to get better, than that's fine, but certainly I’m not vindicated by good stretches in the regular season. I think an entire regular season of great results and the results that we expect would be one thing and then that fuelling playoff success would be another, but the goal for the group is high performance sustained year after year. And I think only after that time, years on, would I ever feel any sort of vindication. But I certainly feel that any criticisms are warranted until we reach that point and I don't take them personally at all.”

On goaltender Frederik Andersen, who is 2-4-0 with a 3.30 goals-against average and .887 save percentage in his past six games

“I think with Fred, this is his fifth year with the team now, and I know [he's] a major topic but I think if Fred has shown us anything in the four and a half seasons that he's been with us, it's that he has a tremendous ability to gather himself when he may not be playing to the standard that he sets for himself and I think he's been very open about that. I think if you go back through each of his seasons, anytime where Fred has found himself in a bit of a rut per se, he's able to pull himself out of it and that's the expectation of what we'll see from him as we move ahead.”

On how satisfied he is with the team’s goaltending depth, a group that includes Andersen, backup Jack Campbell and third-string goalie Michael Hutchinson

“I think when healthy and when everyone is up and rolling I think it's a great tandem and Hutch has come in and given us good minutes. I've got a lot of belief in both Fred and Jack Campbell and Hutch when he's in, so we'll look to continue to get everybody healthy and rolling and go from there.”

“I thought that competition [for spots early in the season] really fuelled great performances from those [bottom-six] players. But really when Campbell came off long-term injured reserve [in late February] and back onto the roster, but has now been sort of day-to-day here [with a lower-body injury], it has sort of limited what we can do, especially because we don't have much waiver flexibility with those guys on the lower end of our roster. And so one of the things we're looking to do is to increase our flexibility on the roster, but also as Campbell gets closer to return and [Wayne] Simmonds gets closer to returning [from a wrist injury], we do have to do some juggling with the cap situation.

On re-signing top-six forward Zach Hyman, who is an unrestricted free agent at the end of this season

“With regards to his future, I'm not going to comment on here about any of the pending free agents restricted or unrestricted. I just don't think it's productive at this time to do so.”

On Toronto’s forward depth moving ahead

“We'll have more guys coming over from Europe as their season ends. Semyon Der-Arguchintsev, he was in the KHL with Torpedo this year, he's in day four or five of his quarantine after their season ended. He had a really good season for them playing as their second-line centre [two goals, four assists in 17 games]. We were happy with him and we'll have more of our others, whether it's [Filip] Hallander [22 points in 47 games with the Swedish Elite League’s Lulea] or Denis Malgin [32 points in 35 games with Switzerland’s Lausanne HC] coming over once their seasons are done. I think as we get deeper into the year the competition will increase and we've had strong performances from guys on the Toronto Marlies as well, whether it's Alex Galchenyuk or Alex Barabanov. We feel good about the depth and where our prospect pool is at right now in terms of being able to challenge guys on the roster and push guys on the roster, so we're happy with that.”