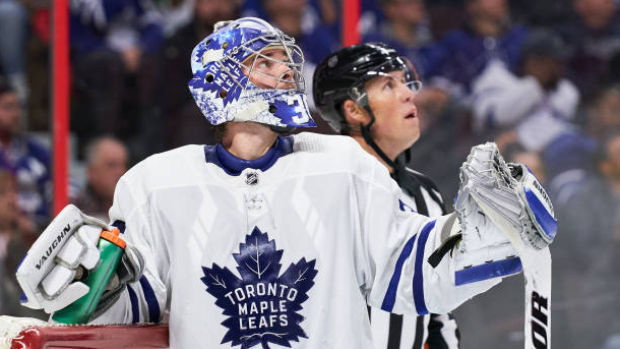 Keefe added his level of concern over Campbell's injury is "low" and Friday was another good day for him on the ice.

Sheldon Keefe his concern level as far as Jack Campbell's status goes is "low," that today was another good day for him on the ice and they'll see how he's feeling tomorrow

He added the goaltender will be re-evaluated on Saturday.

Campbell was originally hurt on Jan. 24 against the Calgary Flames but returned for Toronto’s win over Edmonton on Feb. 28.

Campbell hurt himself again at some point in that victory and has been sidelined since. Keefe said earlier in the week he doesn’t know when Campbell will be available to play, but that his presence for the duration of Monday’s session was “a real positive sign” he’s on the mend.

The 29-year-old has a goals-against average of 1.33 and a save percentage of .951 in three games so far this season. This is his second season with Toronto after coming over in a deal with the Los Angeles Kings last February.