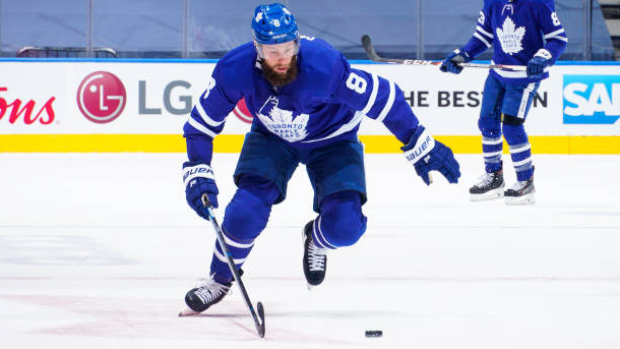 TORONTO — The Maple Leafs have lost top-pairing defenceman Jake Muzzin to injury for the remainder of their qualifying-round playoff series against Columbus, but they aren't in any mood to wallow.

“I believe that in our game in particular, everybody's replaceable,” head coach Sheldon Keefe told reporters on a Zoom call from the NHL’s Eastern Conference Hub at the Royal York Hotel on Wednesday. “Every single player is valuable, and Muzz certainly is among the most valuable and important people. But we’re going to have guys come in and we're going to step up and just continue rolling along as a team.”

The Leafs were less than two minutes away from closing out the Blue Jackets in Game 2 on Tuesday night when Muzzin, out killing a penalty, was cross-checked from behind by Pierre-Luc Dubois and tripped head-first into Oliver Bjorkstrand’s knee.

Muzzin stayed down on the ice surrounded by medical personnel for nearly 15 minutes, before being stretchered off and taken to a local hospital accompanied by general manager Kyle Dubas. The 31-year-old has since returned to the Leafs’ bubble and will remain in quarantine and hopeful of a return if Toronto advances.

When play resumed on Tuesday, the Leafs finished off Columbus without Muzzin in a 3-0 shutout, to even their best-of-five series at one game apiece. But with Game 3 and Game 4 looming in the span of 24 hours on Thursday and Friday, there’s precious little time to make adjustments.

“It's obviously tough. [Muzzin’s] a huge part of our team,” said defenceman Morgan Rielly. “It’s important that we have guys that are willing to take on more responsibility. I don't think you can replace what he does for our team but I think it's important to have other guys help [fill] that void. He really offers a lot, but I think it's a good opportunity for guys to play more minutes, to play in different situations and rise to the occasion.”

Keefe got to work on altering his blue line in Wednesday’s practice, sliding Travis Dermott up to replace Muzzin beside Justin Holl as the Leafs’ top pairing, and adding Martin Marincin to the mix on the third pairing with Tyson Barrie.

Keefe had played Dermott and Holl together late in the regular season when Muzzin had previously suffered a broken foot, and they earned mixed results. Per Natural Stat Trick, in nearly 300 minutes playing together, Dermott and Holl were outscored 12-11 by opponents when on the ice, but held nearly 51 per cent possession.

“Both guys were taking on greater responsibility [back then],” Keefe explained. “Holl had really been doing it most of the season, had taken a big step, in terms of his responsibility and his role. Dermott is evolving and taking on more as it comes. It's really been injury situations that have given him increased opportunity throughout the entire season and this is no different. [He showed before] just that he can handle that [promotion] when called upon.”

In the 16 games Muzzin was sidelined for due to injury in 2019-20, Toronto still managed a 7-5-4 record, and are at least somewhat familiar in how to get by in his absence. But Muzzin’s impact on the group is felt all over, from inside and outside the dressing room.

During the regular season, Muzzin averaged the third-most minutes among Leafs at 21:36 per game and was their second-most used penalty killer, averaging 2:31 shorthanded per night. That’s part of the reason why Keefe tapped Marincin, and not rookie Rasmus Sandin, to step in for Muzzin - not only does Marincin bring comparable size (his 6-foot-5 frame nearly mirrors Muzzin at 6-foot-3), the 28-year-old also logs heavy minutes on the kill, averaging 1:40 shorthanded in 26 regular season appearances.

“We think that Marty brings some of the elements that Muzz brings,” said Keefe. “Obviously he doesn't replace Muzz in the intangibles that he brings; he's a very important player for us. But there are some elements in particular [that Marincin has], like the penalty killing and the size. So there's some similarities there in terms of what he can provide us and that's important.”

Marincin hasn’t played in an NHL playoff game for Toronto since 2017, but was a key part of the AHL’s Toronto Marlies’ Calder Cup run in 2018. That’s a far cry from the championship pedigree Muzzin brings to the group, as a Stanley Cup winner with the Los Angeles Kings.

So while everyone may be replaceable in theory, some elements aren’t transferable. In the high-stakes playoff series at hand, Toronto will have to thoroughly test its own perseverance.

“I think [his contributions] start with the off-ice aspect, in terms of being a leader,” Rielly said. “His playoff mentality, he has experience, he's played in these games before so that'll be missed. But I think on the ice, just playing tough minutes against the opponent's top line, playing penalty kill minutes. He's a big tough guy out there for us that blocks shots, leads by example. We're going to miss him, but it's an opportunity for guys to step up and take more responsibility and have an impact.”