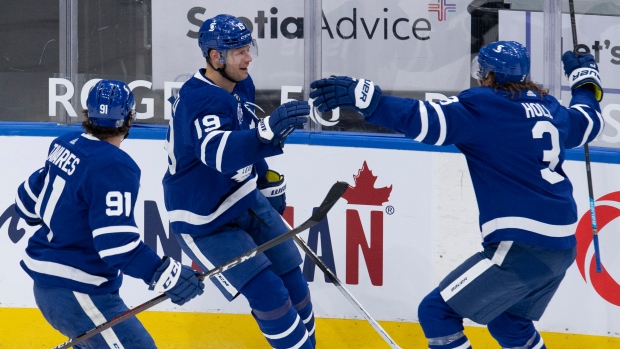 TORONTO — To his teammates, Jason Spezza has earned the moniker “vintage” and he channeled that nickname in a big way Thursday night with a classic hat trick performance to lead the Maple Leafs past the Vancouver Canucks 7-3, and recall memories of his own offensive heyday.

“That was fun to watch tonight. It was vintage Jason Spezza,” said Auston Matthews. “He means a lot to this team, I think more than anybody knows. He put on a show and he deserves it. He works so hard every day and at this stage in his career, the dedication that he pours into his own game and into the team, to see a guy like him get rewarded tonight like he did was pretty incredible.”

At age 37, Spezza became the second-oldest Leafs player to ever register a three-goal game, behind only Hall of Famer Red Kelly. It marked the eighth time, against the eighth different team, in his career that Spezza accomplished the feat, and was his first hat trick since April 9, 2016.

There were no fans in the stands to fete Spezza with the traditional raining of head gear, but Toronto found its own way to give Spezza the first-star treatment.

“No hats, but I got a bit of a water shower walking in the room, so the guys got me good,” Spezza said. “But obviously a nice night. The puck was following me. I haven't had too many of those nights the last couple years so it's obviously nice to get.”

Indeed, Spezza hadn’t registered even two goals in a game since Jan. 16, 2018, relegated mostly to fourth-line minutes in his last two seasons with Toronto while averaging 10:38 time on ice per night.

But no matter what role the Leafs have asked him to take on, Spezza has embraced every one. He’s been a mentor to NHL newcomers like Mikko Lehtonen, a sounding board for rising superstars Matthews and Mitch Marner and a good soldier when Toronto put him on waivers last month because of salary cap considerations.

The dedication Spezza brings to each aspect of his game is what has made him so popular a figure in the Leafs’ room.

“Even more than getting a hat trick tonight, it makes me proud just to see how happy the guys were for me,” Spezza acknowledged. "Those are the moments that I think you never forget. So it’s less so about the goals and moreso just the appreciation of your teammates.”

In fact, head coach Sheldon Keefe said some Leafs were teasing Spezza about how he came in on Monday’s off day to work with the team’s skills coaches only to cap off Thursday's hat trick with tricks picked up from those sessions.

“Nobody would have blamed him for taking the off day,” Keefe said. “But he comes in, he works with the skills coaches and some of the guys are giving it to [him] a little bit because they thought that the hat trick goal looked a lot like some of the drills he was doing there with the development staff here this week. So it's great to see him get rewarded for that and the guys were really happy for him.”

“He can't take a day off,” added Matthews with a laugh. “Even when we have days off, he still goes in there. He skates, prepares sticks, prepared his gear. He'll do whatever, he just loves being at the rink. To see the dedication and the passion that he has for the game day in, day out, it's just incredible.”

Matthews may not have managed a hat trick of his own to match Spezza’s, but he did add two goals in the win over Vancouver, while Marner and John Tavares pocketed the others.

Toronto was in total control of the action from puck drop, jumping out to a lead they’d never relinquish with Matthews’ end-to-end strike early in the first period. It was right around then that the Leafs were also reduced to having only five defencemen, after Travis Dermott suffered a leg injury on his first shift in a collision with Tyler Motte.

Keefe said the issue with Dermott was “minor,” though, and characterized it as a charley horse that the blueliner couldn’t shake. He’s expected to be reassessed at Friday’s practice.

But with the club’s offence rolling, Toronto was able to absorb Dermott’s loss more easily. By the time Spezza had dangled through Vancouver’s defence and past Thatcher Demko’s left pad for his third strike, it was 6-3 Toronto and victory was all but preordained.

“Vintage Spezz right there,” confirmed Marner of his teammate’s showing. “Some of those shots and goals and moves he's making, it's vintage. I think anyone is happy for that guy whenever he does well.”

Either way, Thursday was a night Spezza is likely to remember for years to come, as will those on the bench who watched what continual dedication to his craft can still bring about for the veteran.

“The game has been good to me,” Spezza said. “I think I'm still chasing the Stanley Cup and that's what keeps me driving but just coming to the rink and being part of a team I don't think you can ever replicate the bond you have with teammates over the years. There’s ups and downs and trials and tribulations, but we always have each other's back and that's pretty special stuff so I try to stay motivated and keep myself relevant and make sure that I can help the team.”​