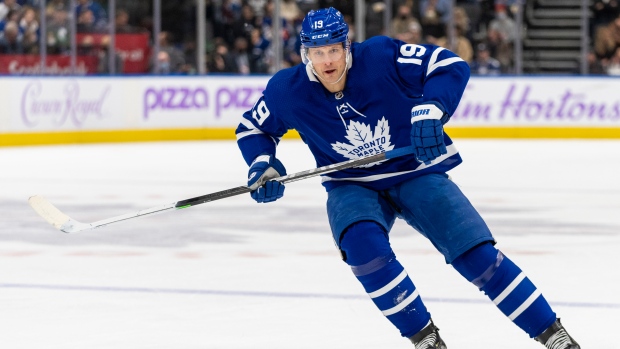 It's Toronto or bust for Jason Spezza.

The 39-year-old forward said on Tuesday that if he returns for a 20th NHL season in the fall, it will only be with the Toronto Maple Leafs.

An emotional Jason Spezza says it’s too soon to discuss his playing future. “This is the only place I would play.”

"This is the only place I would play," the Mississauga, Ont. native said.

Spezza, who played on a one-year, $700,000 deal this season, was speaking as part of the team's end-of-season availability following their Game 7 loss to the Tampa Bay Lightning on Saturday night.

The second overall pick in the 2001 NHL Entry Draft called the first-round loss "jarring" and said the team is surprised to already be out of the playoffs.

Jason Spezza says he won't play anywhere but Toronto and still needs to have discussions with management to see if they still see a role for him next season.

Spezza just completed his third season with his hometown team. He appeared in 71 regular season games, scoring 12 goals and adding 13 assists. Spezza was a healthy scratch in the first two games of the Lightning series, but added an assist in the five games he played.

Spezza, who previously spent 11 seasons with the Ottawa Senators and five with the Dallas Stars, has appeared in 1,248 career games, the 98th most all-time and ninth-most among active players.

As TSN Hockey Insider Chris Johnston reports, veteran defenceman Mark Giordano also appears open to a return to the club as he said Tuesday "it's no secret" he enjoyed playing in Toronto.

Mark Giordano, pending UFA, says "it's no secret" he enjoyed playing in Toronto. He's clearly open to a return.

The Toronto native, 38, was acquired at the trade deadline from the Seattle Kraken.

In 20 regular-season games with the Leafs, Giordano registered two goals, 10 assists, and a plus-12 rating.